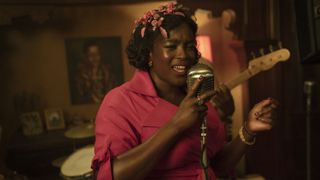 Lovecraft Country feels like a special sort of gift for genre fans. The HBO series, based on the Matt Ruff novel of the same name, comes from the powerhouse creative trifecta of Misha Green, Jordan Peele, and JJ Abrams. The series follows the adventures of Atticus Freeman (Jonathan Majors) and Letitia "Leti" Lewis (Jurnee Smollett) as they battle the monsters and demons lurking right beneath 50s America's pristine surface.

It's right in the program's name, really — a callout to one of the masters of the science fiction and horror genres. But when you acknowledge H.P. Lovecraft's overt racism, along with the Jim Crow laws of 1950s America, the scope and importance of the program are bumped up a few pegs. Given the cultural powder keg we're currently living in, a clear wake-up call to many white Americans that our country's racist roots are still sprouting a whole load of strange fruit from coast-to-coast, a show like Lovecraft Country brings, along with its otherworldly tales of UFO invaders and dimension-jumping cult members, some unexpected education on an era still vastly misunderstood by a huge portion of the general populace.

Harkening back to the classic horror story, "Strange Case of Dr. Jekyll and Mr. Hyde," the themes explored in this week's episode revolve around identity and the shame that comes with refusing to accept the truth of circumstance, instead donning a proverbial mask or two. The politics of race, gender, and sexuality are perused here, each wrapped up in the fabric of an America of a different time. This bottle episode mostly strays from Atticus and Leti's storyline to hone in on the struggles of two ancillary yet fully important characters in the series: Leti's blues-singer sister Ruby Baptiste (Wunmu Mosaku) and Atticus' abusive father Montrose (Michael Kenneth Williams).

"When we were filming almost two years ago, none of these Black Lives Matter protests were really going on," cinematographer Michael Watson tells What To Watch. "So, we were all as shocked and surprised, and I guess, elated in a way, that this show came out when it did because it couldn't have possibly been more timely."

The use of tone, color pallets, and iconic American photography were all on Watson's mind when he was brought on to helm the back-half of the season. Here, he speaks with What To Watch about the creative process, as a Director of Photography, in bringing this uniquely important genre series to life.

The DNA of Lovecraft Country feels like it was born out of WGN America's Underground, Misha Green's previous TV series. Talk to me about your experience working on both shows and the challenge and responsibility of not only authentically representing this part of American history but doing so in a way that gives plenty of room for the supernatural elements of the show to breathe.

Michael Watson: A lot of that happens with Misha, to be very honest with you, and I'm not going to strip away the value that Rob McLaughlin — the other DP — and myself brought to the table. But she brought and the team at HBO brought such a strong piece of material to the table. What Rob and myself brought to it was more visual than contextual in the sense of the story. So let me preface this by saying she is such a creative genius and such an eloquent writer that I thought it was very full and I was grateful to be able to play in this world that she wanted us to create for her visually.

So for me, the biggest challenge was staying as true, visually, to the material as possible. And that was a challenge simply because this is Lovecraft. It's sci-fi; it's horror. There's a little bit of romance, too. So there's a lot going on and right from episode 1, it's basically no holds barred in your face. Right from the very first episode, you are thrown into that world.

Misha basically kind of got her hands onto the content and decided to go a completely different direction than anyone had foreseen. And here's the thing that I find very interesting as far as timing goes.

"Strange Case" explores identity, how we present ourselves outwardly, and how we use certain tools of presentation to hide our true selves. This theme comes through in Ruby's storyline as she walks around as a white woman in the South Side of Chicago. And it’s in Montrose's internalized struggle with his sexuality as he crowds his life with shame, alcoholism, and abuse. Through both of their journeys, we see instances of the color red. Talk to me about the use of color, specifically red, in exploring these plot lines.

Watson: Let's talk, in particular, about Montrose. I'm sure if you have watched episodes one through five, you know that he's a very tortured character. He’s struggling with his own sexuality. I don't think there's a spoiler alert here, because I think they kind of devote time to some of this in episode 1, but he's struggling with his brother Uncle George’s (Courtney B. Vance) relationship with his now deceased wife, and the paternity of Atticus -- you know, who does he really belong to? So, Montrose is very, very tortured. When we finally are shown who he is on the inside, I wanted to use red to convey a feeling of passion and love, because that's not really who he is on the outside. And it was very important for me to be as subtle as I could with that.

How I particularly utilize color is: I want the audience to, as subtly as possible, key into a message that the character is conveying. So, for me with Montrose, it was red. Particularly, during the drag queen ball. He's there for Sammy (Jon Hudson), and he's there to support him. But he's also there to kind of find a part of himself that he's suppressed that he only deals with in a relatively violent manner. His first encounter with Sammy is very aggressive. I mean, it's, it's borderline [assault]. I think that moment is Montrose still struggling with who he is as a person, and it’s not until he's at the drag queen ball, that you actually get a glimpse of the fact that maybe he really does love Sammy and maybe he is willing to admit that to himself and open up to that a little bit more. So, for me, red was about love and passion for Montrose.

Is it safe to deduce that red, in terms of Ruby’s story, is on the opposite side of the spectrum?

Watson: Yes. Ruby's red gloves are all about aggression and her attempts to take some control over that which she has no control over. You know, she's incredibly beautiful and incredibly intelligent, yet she still has no real control over her own life and when she is basically confronted with another Black woman working in the department store that she has been trying to get a job at forever, she's devastated. For me, those red gloves are her way of being aggressive and taking some of that control back.

There’s a push-pull element regarding the cycle of power and frailty that Ruby experiences throughout the episode. A lot of that comes through in the body transformation scenes which are violent, gory, and a bit jarring. You can easily point to a number of werewolf transformation scenes in movies as possible inspirations here, but there’s also this visual of one person emerging from another person’s body, shedding their skin, much like Freddy Krueger did to Jesse in A Nightmare on Elm Street Part 2. Talk to me about your involvement in bringing these elements of body horror to life.

So, we started out with a visual or a prosthetic and then they built on that with the visual effects. Then it becomes way more involved in the world of visual effects creation. A lot of it played out with the lighting, and not actually showing so much of the transformation. We didn’t want to give away too much, so we kept a little bit of that process in the darkness, letting the audience kind of figure out what's really going on here. It was an incredible challenge not to constantly make it out to be just something gory, gross, and unappealing. And I also wanted to kind of touch on this little bit of curiosity, you know, by keeping it all somewhat in the shadows.

Let’s shift gears a bit and talk about the use of music in the series. Like Underground before it, both shows are period pieces, yet she utilizes modern-day music to further help the mood and feel of the stories being told. For cinematographers, there are things like lookbooks you probably refer to in order to get the look and tone of the series down, but were you ever supplied a playlist of music that Misha planned to use in the series, to help inspire your work behind the camera?

Watson: Oh, absolutely. We were given, I would literally say, volumes of reference material, everything that was historic, including music, and it was amazingly helpful. I personally, however, try to not tune in too much to the music part because as you know, especially because you have previous experience with Misha’s work, she tends to lean more to the current feel of music even if it's a period piece, which does add a certain stylized edginess to it. But I try to stay away from that because, visually, I wanted to really be more in the period and stay true to the period. That way I think it made for an even more pure juxtaposition between the music and the visuals.

Communicating with your publicist through email, they made mention of the works of photographers like Vivian Maier, Harold Feinstein, Fan Ho, and Fred Herzog that you found inspiration in. Can you talk about your research process in bringing this era to life?

Aside from Lovecraft Country proving that we are long overdue for, say, a Black Mulder and Scully to root for in a monster-of-the-week procedural series, the show is here to teach us some things. Much like many didn't know about the Tulsa riots until Watchmen aired, there are portions of America's history that audiences are just learning about now after watching this show.

Watson: Absolutely. The aspects of the show are that not only is it entertaining, but it is educational on certain levels. I've literally had friends that will call me up and be like, “I didn't know that there was such a thing as a Sundown Town.” I tell them to go look it up. And their minds are just blown.