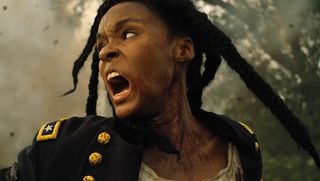 I won't mince words - this one hurts. Lionsgate has just announced that Antebellum, one of the most exciting horror announcements of 2019, will be headed to video on demand September 18th of this year rather than getting the theatrical release it so desperately deserves.

To their credit, the do seem to be making fun of themselves a bit.

For those who might not remember, Antebellum was exciting at its first trailer because no one had heard of it yet. The film simply came out of the blue one day, and horror fans couldn't have been more thrilled. In the interest of stowing the sad-sack bit, the film is still very exciting and it looks like it will be a genuinely fun ride. It's just a shame it won't be getting the theatrical run that it deserves.

The film had just been pulled from Lionsgate's release calendar over the weekend.

Because so little is known about the project, the synopsis is pretty short and sweet: Successful author Veronica Henley finds herself trapped in a horrifying reality and must uncover the mind-bending mystery before it's too late.

Guess we'll find out what it's all about in the middle of September. On our couches. (I'll be fine.)