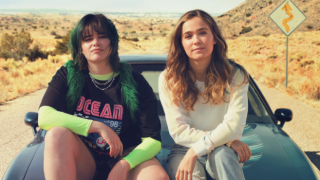 HBO Max has released the first trailer for its original film Unpregnant, based on the young adult novel of the same name.

The novel was written by Jenni Hendriks (How I Met Your Mother) and Ted Caplan (music editor for The Hate U Give, The Greatest Showman). Rachel Lee Goldenberg (Valley Girl, A Deadly Adoption, The Mindy Project) directs the motion picture and also wrote the screenplay with authors Hendriks & Caplan, Jennifer Kaytin Robinson (Someone Great), and William Parker.

Here’s how HBO describes the film:

In Unpregnant, seventeen-year-old Veronica (Haley Lu Richardson) never thought she’d want to fail a test—that is, until she finds herself staring at a piece of plastic with a blue plus. With a promising college-bound future now disappearing before her eyes, Veronica considers a decision she never imagined she’d have to make. This never-taken-lightly decision leads her on a 1000 mile hilarious road trip to New Mexico over three days with her ex-best friend, Bailey (Barbie Ferreira) where they discover sometimes the most important choice you’ll make in life is who your friends are.

The 2-minute trailer kicks off with Veronica, played by Richardson, finding out she’s pregnant in the stall of a women’s restroom at school. As she discovers that positive test, a head pops over the top of the stall frightening her into dropping the test on the floor as she looks up to see Barbie Ferreira, who plays Bailey in movie.

We then flash to a scene of Veronica searching for places where she can potentially have an abortion and finding clinics to do so, ultimately leading her to knock on Bailey's door to ask for help, since she wants to hide the pregnancy from her boyfriend, best friend, and “Jesus freak” parents.

Bailey initially slams the door in her face, but then opens it again and agrees to the abortion road trip. Check it out, below:

While the premise of this one is a bit different than most buddy films, it looks like the duo get involved in some fun antics during their 1,000-mile journey, they also deal with some of the issues that caused them to grow apart in the first place. It's definitely one to consider adding to the ol' watch list come September.