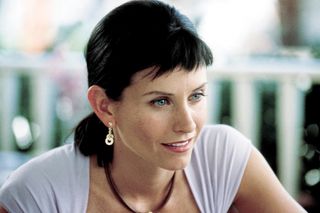 There hasn't been a ton of good news in 2020, but among it has been the fact that we'll be getting a new Scream movie in the not-so-distant future. News about actors' involvement has slowly started to trickle in since the film announcement was first made earlier in the year, but Courtney Cox's Gale Weathers (and her iconic hairstyles) has been in question until today.

The franchise will be resurrected by none other than Matt Bettinelli-Olpin and Tyler Gillett, two of the men behind 2019s exceptional Ready or Not. Their company, Radio Silence (which also includes producer Chad Villella), released the below statement about Cox's involvement today.

“We can’t imagine Scream without the iconic Gale Weathers and are so incredibly thrilled and humbled to have the opportunity to work with Courteney. We’re absolute mega fans of her work and we’re so excited to join her in the next chapter of the Scream saga!”

Currently, the picture is set to release sometime in 2021. However, with studios not able to safely shoot in North America yet, and with some key actors' involvement not yet confirmed, you can probably expect those dates to move. Neve Campbell (Sidney Prescott), is currently the biggest name awaiting confirmation. She has, however, confirmed that conversations are being had about her return.