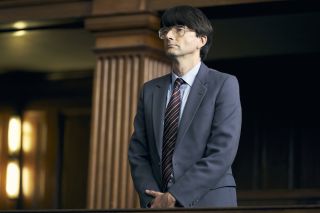 One of the most haunting imports of 2020 undoubtedly will be Des — the story of the British serial killer that just made its debut on ITV. Playing the notorious Dennis Nilsen who killed a more than a dozen people? David Tennant.

And Des is coming to America on Sundance Now starting Oct. 15.

This show is not a good time, Tennant said in our interview.

"Reading a script that was as dark it this was you thought nobody is ever going to dare make this," says Tennant. "Also it feels like you kind of carry a responsibility because it's a true story, because Nilsen did terrible things and because there are still people alive who are still devastated by the things he did."

Also starring in Des are Daniel Mays (who you'll remember from the excellent White Lines on Netflix) as detective Peter Jay, who led the investigation, as well as Jason Watson (The Crown) as Nilsen's biographer.

Sundance Now runs $6.99 a month, or $59.99 a year. It's available as a standalone subscription, as well as through other services such as Amazon Prime Video Channels, YouTube TV, Sling TV and Roku.View Deal