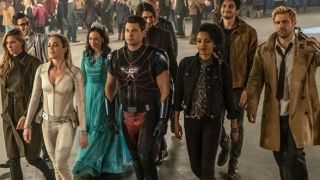 DC FanDome works a little bit differently this go around. There's no schedules, and time doesn't matter! What I'm saying here is that it's the perfect kind of format for the Legends of Tomorrow crew! Legends is another one of the series that wasn't able to cobble together a sizzle reel in time, but cut them some slack. Most of them are still finishing up their 14 days of quarantine in Vancouver so they can resume filming.

Like Black Lightning, Legends of Tomorrow was the only other Arrowverse show that was able to complete its season before COVID threw things off the rails. Because of that, they didn't have any past footage to pull from.

Here's what we learned: