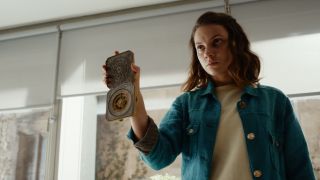 When we last left the strange world(s) of His Dark Materials ... Actually, never mind. There's almost no way to succinctly sum up the massive Philip Pullman series that became an HBO series, except to say this:

A young girl is left by her enigmatic father in the hands of a woman who doesn't have her best interests at heart. Meanwhile we see a few people sneak between worlds, there's an armored bear sought out by Alexander Hamilton, children have been kidnapped and ... Andrew Scott is back.

That just about sum it up for you?

His Dark Materials is an epic series in any sense of the word. It's also one that you really do have to just jump into and let it ride. And do so sooner rather than later, because HBO just let loose a couple minutes of teasers from Season 2.

One bit of obviousness here is that we get a lot more Andrew Scott as Col. John Parry, who appeared in Season 1, but didn't quite factor in as a character just yet.

But Lin-Manuel Miranda's swashbuckling ballooner Lee Scoresby is back, of course, and Dafne Keen's Lyra is leading us to places we probably can only imagine. (Unless you've read the books, of course, in which case you've already done some imagining.) And one of those places is Cittàgaze.

Here's the line from HBO itself:

In the second season of His Dark Materials, Lord Asriel (James McAvoy) has opened a bridge to a new world, and, distraught over the death of her best friend, Lyra (Dafne Keen) follows Asriel into the unknown. In a strange and mysterious abandoned city she meets Will (Amir Wilson), a boy from our world who is also running from a troubled past. Lyra and Will learn their destinies are tied to reuniting Will with his father but find their path is constantly thwarted as a war begins to brew around them. Meanwhile, Mrs. Coulter (Ruth Wilson) searches for Lyra, determined to bring her home by any means necessary.

Other new characters gleaned in the teaser are Jade Anouka as Ruta Skadi, and Simone Kirby as Dr. Mary Malone.

No word yet on when to expect the second season