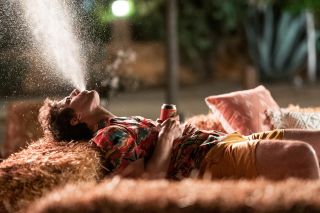 Palm Springs, as you've no doubt read in our review by now, is a perfectly fine movie. Above average, in fact. And, apparently, it's now the leader for Hulu in hours watch over its first three days, beating out any other film on the streaming service for the same period.

That's according to IndieWire, citing an unnamed Hulu spokesperson. There weren't any numbers given, though, so it's a little difficult to say how that fares in context to other movies on other services. (Not that the services all use the same metric in any case.) IndieWire also says that Palm Springs "generated the highest amount of social interest for any Hulu original film to date over its premiere weekend, and was the most discussed Hulu original film on Twitter over its first three days." That's not necessarily indicative of anything — social numbers can be a fickle thing — but in any event, the movie's done pretty well.

And that's because it's a pretty well-done movie. Starring Andy Samberg and Cristin Milioti, it's a new take on the time-loop genre in which they're wedding guests stuck repeating the same day in Palm Springs over and over again. They eventually learn things about life and love and themselves and maybe (we're not going to spoil anything here, but c'mon) find their way out of the loop just in time for the end of the movie.

And the do so in a way that's still fun to watch.

With Palm Springs now the biggest three-day, opening-weekend streamer for Hulu, that means Parasite has moved to No. 2. The award-winning film from South Korea debuted on Hulu this spring after initially being made available on-demand.

In addition to its on-demand content, Hulu also is the No. 1 service for live TV in the United States, with some 3.3 million subscribers.