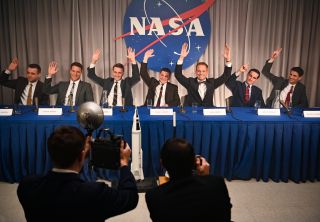 Disney+ and Nat Geo today at Comic-Con@Home gave us our first good look at its upcoming remake of The Right Stuff, a series based on the book by Tom Wolfe that became an epic 1983 film.

During the panel, we got our first taste of the Nat Geo-produced series, which tells the tale of the space race from the height of the Cold War, as Russia dominates with the first sub-orbital mission, and then the first manned mission. The newly formed National Aeronautics and Space Administration is tasked with getting America in to space quickly and safely, and Project Mercury sets out to find the military's best pilots to become the first astronauts.

There's an interesting tie-in here to another space-race project. Actor Eric Ladin las Chris Kraft in this version of The Right Stuff. And he played another space legend — Gene Krantz — in For All Mankind on Apple TV+, which showed off its second season at Comic-Con@Home. That one was another look at the space race in the same era, but one in which Russia continued to lead — and one in which women played a much larger role in NASA, including as astronauts. (In reality, the U.S. didn't get a woman into space until Sally Ride, on board the space shuttle in 1983. Russian cosmonaut Valentina Tereshkova became the first woman in space in 1963.)

The clip shown during the panel has Navy pilot Alan Shepard getting his letter inviting him to astronaut training, and showing up late for the initial briefing.