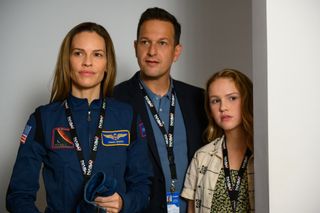 As far as we can tell, a huge part of Netflix's Away is going to focus on how these astronauts handle being away from their families and deal with the dynamic of living in space surrounded by people different from them. In Emma Green's (Hilary Swank) case, this will act as a particularly difficult character hurdle.

Her husband Matt (Josh Charles) starts experiencing issues with his health (we are unsure of the severity as we go into the series). While it's assumed Emma would like to be there to help, instead she's forced to leave her teenage daughter in her stead. Turns out critical missions to mars don't get put on hold due to family health crises.

Emma's daughter, Alexis Logan, will be played by Talitha Eliana Bateman. You likely recognize the actress from titles like Annabelle: Creation, Love, Simon, and Geostorm. (I know no one saw Geostorm, it's just fun to remind folks that it exists.)

Bateman's career spans back to 2012 when she had her debut in George Biddle, CPA. The eighteen-year-old has already seen an impressive career, so it'll be interesting to see how she plays against stars like Hilary Swank and Josh Charles in a series setting. She has eight siblings, so she's likely always felt right at home on a film set.

Want more info on Away? Check these out!
Everything you need to know about Away
Away image gallery
Six things to watch before you binge Away
Away's first full trailer

Series Synopsis:
From Executive Producer Jason Katims, the Netflix series Away is a thrilling, emotional drama on an epic scale that celebrates the incredible advancements humans can achieve and the personal sacrifices they must make along the way. As American astronaut Emma Green (Hilary Swank) prepares to lead an international crew on the first mission to Mars, she must reconcile her decision to leave behind her husband (Josh Charles) and teenage daughter (Talitha Bateman) when they need her the most. As the crew's journey into space intensifies, their personal dynamics and the effects of being away from their loved ones back on Earth become increasingly complex. Away shows that sometimes to reach for the stars, we must leave home behind. Created by Andrew Hinderaker, the series is executive produced by showrunner Jessica Goldberg, Jason Katims, Matt Reeves, Andrew Hinderaker, Edward Zwick, Hilary Swank, Adam Kassan and Jeni Mulein.