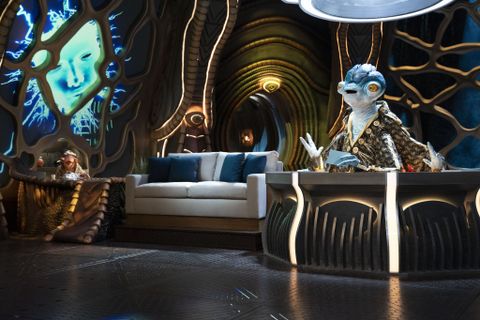 'Earth to Ned' is way more fun than it has any right to be.

Late-night talk shows are a staple of the modern television landscape, but they are also being faced with a crisis of distribution as younger audiences have moved away from appointment-based broadcast viewing and have shifted almost entirely to streaming. It’s no longer enough to have a distinctive and likable personality to draw in viewership, but the format is relatively cheap to produce, so streaming networks are now looking to nab a slice of the pie. The question is then how does one introduce the late-night format to a younger audience in a way that will reinvigorate interest?

Enter Earth to Ned, a collaboration between Disney and The Jim Henson Company that puts a novel, family-friendly spin on the talk show formula. Ned (voiced by Paul Rugg) is a four-armed alien sent to conquer Earth at the behest of his admiral father, but upon arriving he falls in love with the planet’s greatest natural resource: celebrities. Instead of blowing the planet up, he buries his ship beneath the Earth’s crust, sets up a studio on the deck, and enlists the help of his first officer and sidekick Cornelius (voiced by Michael Oosterom and looking like someone left Alf in the microwave too long), his reluctant ship’s AI B.E.T.I. (voiced by Colleen Smith), and a gaggle of demented, chittering fuzzballs known as the Clods, all so that he can have a talk show of his own and meet these celebrities.

The first episode introduces the late night format with a characteristically Muppety snark, theming the episode around Ned figuring out how exactly a talk show is supposed to work while not quite understanding how American human culture functions. The show firmly establishes a tone that makes clear that while kids are absolutely welcome to enjoy the slapstick shenanigans of the Clods and to laugh at Ned’s perpetual ineptitude as a host, adults have just as much to get from humor that draws on their own generation’s points of reference. This is made possible by some very funny writing that nails the fine line between acknowledging the absurdity of the show’s fiction and reveling in the reality it has imposed, particularly in sketches where Cornelius beams to Earth to discover different facets of human life. An extended bit shows Cornelius' rise and fall in the stand-up comedy circuit and makes for a quotably hilarious time that doesn't condescend to its audience.

Like any talk show, though, the key is in the guest interviews. Every episode sees two celebrities beamed in to chat it up with their alien host and play absurdist takes on trivia and improv games, all to pretty great comedic effect. The best guests, like Kristen Schaal and Paul Scheer, are comedians skilled at the kind of free-flowing banter necessary when your comedy partner is a giant alien puppet, and credit where it’s due, the extemporaneous puppeteering is as impressive as it is funny. The best guest segments settle into an awkward groove not unlike an age-appropriate Between Two Ferns.

Unfortunately, when the guest segments aren’t focused on comedians and instead serve the episode’s theme, the cracks in Earth to Ned begin to show. The series is edited in such a way that these segments never drag, but you can tell that Billy Dee Williams just showed up for the paycheck in the episode devoted to Star Wars brand integration, and Eli Roth sucks all the oxygen in the room during the horror-themed episode. Developing episodes around these themes is a clever way to circumvent the format’s usual reliance on current events, particularly for a binge-able show streaming on a family-focused platform, but without a comically savvy guest to play off of, Ned just isn’t quite up to the task of carrying the interview on his own.

Even so, Earth to Ned is way more fun than it has any right to be. As someone who hasn’t felt the need to watch a late-night program in years, I found this to be a charming alternative that I wouldn’t mind watching with kids I was caring for. It’s a breezy, fun distraction of a show, and if celebrities and puppets have one thing in common, it’s that they thrive when distracting us from reality.