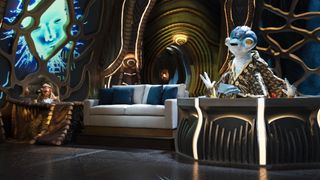 In "Earth to Ned" an alien interviews the world's celebrities. (Image credit: Disney+)

Next month Disney+ has plans to launch its first original talk show, and it looks like it’s going to be pretty out of this world. Literally.

Earth to Ned stars two extraterrestrials named Ned and Cornelius who were presumably tasked with invading Earth, but decided to call things off after they fell in love with the human race. In the show, which is broadcast from the bridge of their spaceship hidden deep underground, the duo are interviewing Earth’s “greatest resource” which they have deemed to be celebrities.

Of course, it’s important that their efforts don’t get discovered by their home planet. Ned’s dad is apparently the Admiral of the Galactic Fleet and would be none too pleased to hear of his son’s antics. To keep things undercover, Ned is using artificial intelligence built into the ship, called BETI, as well as CLODs, which apparently stands for Cloned Living Organisms of Destruction.

For two guys new to show business (and Earth as the case may be), Ned and Cornelius actually have a pretty stacked list of celebrities lined up to participate.

The first 10 episodes of Earth to Ned arrive on Disney+ on September 4th.