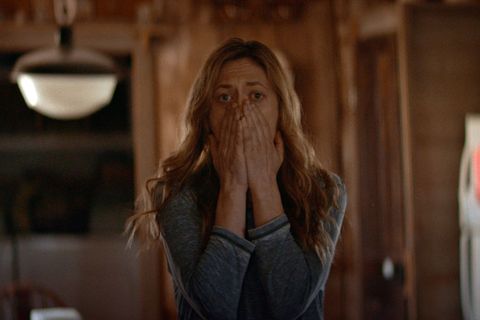 'The Dark And The Wicked' is horror in its purest form, rooted in traumas and emotions no human can ignore, emphasized by supernatural visitations that'll turn sobs into screams.

Bryan Bertino returns to The Strangers form in The Dark And The Wicked, a movie that purifies, quadruple-distills, and bottles true evil. It's what Webster's dictionary definition of "horror" would cite as an example. Bertino explores grief and death with chilly clutches that grasp, strangle, and offer no floating lifesaver of hope. "Wow, that sure sounds bleak!" You're everloving right because sometimes the world is a nasty place, and monsters lying in wait will strike without reason or mercy. Don't expect an artistic depiction of rotten heritage like Relic. Bertino doesn't care to provide contextual padding in the form of spiritual relief.

Demons gonna demon, y'all. Sometimes there's no "reason," which intensifies the infection that oozes from untreatable wounds. Physical or mental.

Marin Ireland stars as Louise, who returns home due to her father's diminishing health. Alongside brother Michael (Michael Abbott Jr.), Louise attempts to lessen her visibly exhausted mother's burden (Julie Oliver-Touchstone). It's a situation children often acknowledge too late, except Louise and Michael discover something worse than wasted time. Their mother mutters about a figure looming over pa's bed, where he's non-responsive, slowly killing the once able man. That's when the visions start, as Louise and Michael must question whether their father's impending demise is a natural condition or something supernatural caused from beyond.

For horror fans, Bertino's rural quietness is familiar. An isolated plot of land with open fields, a rustic essence, and livestock roaming free. The ailing father, lying motionless under bedsheets with a tube feeding oxygen through his nostrils. Louise and Michael are forced to process their beloved parent's condition, now withered. It's the final ritual of our mortal existence that we often hide from consciousness, as dialogue between the siblings hints at neglectful ignorance when they should have been more involved. Nothing is pretty about this picture, and that's what Bertino strives to exploit by introducing something even worse.

The Dark And The Wicked is fiercely determined to value death in its least forgiving stages. Furthermore, it punishes bystanders. Maybe it's mama's cutting board "accident" while chopping vegetables, or Louise's unsettling encounters with her father's imaginary figure, standing tall, or Michael's equally disturbing interactions with his own nightly visitor. Always confronted by milky white eyes, congealed veins, and greyish corpse skin tints.

Finality is an infection that plagues all who are present for its finishing touches. It spreads through thoughts, and self-hatred, and fearful escapist decisions, and the inevitable cannot be halted, for whom the bell tolls. Such is the message of Bertino's looming presence through tortures and tricks aimed at those who are already experiencing immense psychological torments. A vile entity that wants everyone, or anyone to suffer, which you can imagine it's watching with the toothiest cheek-to-cheek grin.

As a cynical, self-destructive flesh sack of emotions, boy do I connect with horror cinema that reminds its viewers that sometimes nothing is alright, but that's reality. Sure, Bertino's methods are unconscionably cruel. So is life. As a horror story about an inexplicable deviant that collects souls for funsies, The Dark And The Wicked understands its tone may be off-putting, yet never flinches. Graphic images only instill so much terror, be it unsightly stew ingredients or bodies swaying in the breeze or goats for the slaughter.

Bertino's screenplay beckons the Grim Reaper and stares him in the face, eyeballing every ugly detail. Characters try to ward off what's coming with ornamental bone totems and sacrificial offerings, but the devil doth persist. Louise and Michael can only survey the damage and take stock of the shapeshifting force that drinks in despair like its thirst is unquenchable. Happy endings only exist in movies, after all.

Bryan Bertino returns to the home invasion subgenre in The Dark An The Wicked, but there are no defensive stances this time around. It's a brick-heavy, barbed pill to swallow, which is an exquisite unification of funeral paranoias and demonic intervention. That's what makes a horror film like this one so special. Without sacrificing ghostly white-knuckle tension, Bertino taps into humanity's most conventionally devastating recurrent thoughts. A film that sends shivers throughout your body but also burrows deep into your locked-away subconscious reaches as to deny any trace of sympathy. Evil is as evil does, I'm afraid - what a harrowingly ruinous ode to existence Bertino creates.

The Dark An The Wicked is part of our Fantasia Fest 2020 coverage.