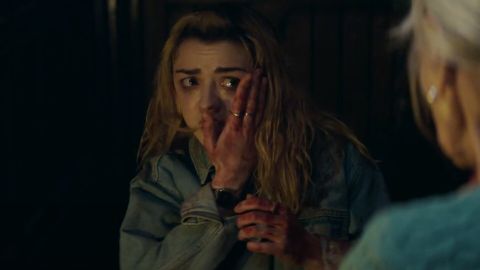 'The Owners' isn’t trying to reinvent the wheel on home invasion thrillers, but there are hidden depths to its simple set-up.

It’s easy to approach a film like The Owners with an unassuming air. It’s a home invasion thriller, a member of a genre that has been well-worn but not in terrible need of subversion or reinvention, as the invasion of one’s personal sanctuary remains one of the constant real fears of modern society.

When something like The Owners does come along, it’s hard not to sit up and take notice. Not because it is an especially deep genre exercise or even that perverse a subversion of your expectations, but because it’s so effectively plotted out and delectably performed that it’s impossible not to be engaged with its sick little twist on the formula.

The film opens on three young men surveilling a well-off country home as the owners – Doctor Huggins (Sylvester McCoy) and his mentally infirm wife Ellen (Rita Tushingham) – set out for a night on the town. The would-be robbers are aware of a safe in the home because Terry’s (Andrew Ellis) mother works for the Hugginses as a housekeeper, so Nathan (Ian Kenny) and Gaz (Jake Curran) are eager to get whatever wealth is stored away inside. Nathan’s girlfriend Mary (Maisie Williams) shows up to take back her car in order to go to work, but she is dragged into the home by Nathan’s selfish desires. While Gaz narcissistically tears apart the furnishings and Nathan revels in the fantasy of being surrounded by such wealth, Terry bemoans the unnecessary destruction and nervously wants to get out of dodge. His warnings turn prescient when the Hugginses arrive back home, and Gaz leads the charge in brutalizing the elderly couple to get the combination to the safe.

Sylvester McCoy, though, is the performance that makes this film shine. Anyone familiar with the range McCoy exhibited during his tenure as The Doctor on Doctor Who shouldn’t be surprised to learn that Dr. Huggins’ smile and friendly tone don’t always match the sinister undercurrent of his actions. For a man so preoccupied with his wife’s safety, he’s oddly resistant to giving up the combination to their safe, and the more time the characters grow to empathize with him, it becomes a very real question of whether this man is worth their empathy at all.

As the film transitions into its latter half, the plot evolves into the characters airing their dirty laundry with one another as the unassuming Hugginses shift themselves subtly into positions of dominance. The twisty nature of the gradual reveals displays economical screenwriting at its finest. Mary adjusts herself as the de facto protagonist, giving Maisie Williams a chance to flex some scream queen muscles as a new brutal reality gradually sets in. The camera gracefully swings around in ways that train you on the house’s geography and allow for long takes of actors chewing into the nuances of their characters, so once the tone of the film transitions to freneticism, the camerawork doesn’t feel as disorienting as it otherwise would.

The only thing that mars the experience is a rather inexplicable choice to collapse the aspect ratio from widescreen to fullscreen in the third act, as it makes for a jarring shift that doesn’t seem to serve much of a stylistic or thematic purpose beyond making shot composition unnecessarily claustrophobic. However, that minor quibble doesn’t detract from an otherwise nasty and engaging piece of work. The Owners isn’t trying to reinvent the wheel on home invasion thrillers, but there are hidden depths to its simple set-up that make this an excellent addition to the canon. It just goes to show that you can’t judge a film, or a friendly country doctor, by what it first appears to be.

The Owners will be available on VOD on September 4, 2020.