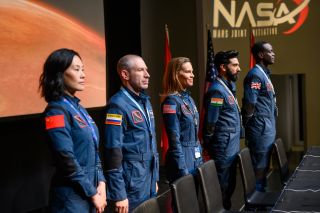 Away is the latest in a long line of space and sci-fi series on Netflix. And Away will be on Netflix on Sept. 4, 2020.

It's not even the first Mars series on Netflix, and it's definitely not the only original series to feature the Red Planet in recent years.

But that doesn't mean it's not greatly anticipated, thanks in no small part to the inclusion of two-time Oscar winner Hilary Swank.

And when Sept. 4 comes and we get our first full taste of Away, you should expect the entire series to drop at once — perfect for binging — because that's how Netflix rolls.

We don't yet have a list of episode titles, though. That'll have to wait until we get a little closer to the premiere of Away on Sept. 4. We do, however, know who's in the show.

Hilary Swank will play Emma Green. She's in charge of the mission of five, and her fellow interstellar travelers include Mark Ivanir as the Russian Misha Popov, Vivian Wu as China's Yu Wang, Ray Panthaki as Ram Arya of India, and Ato Essandoh as the British astronaut Kwesi.

Away will focus not just on the journey, but also on the the toll leaving home takes on the travelers and their families. Josh Charles plays Green's husband, Matt, and Talitha Bateman plays their teenage daughter, Alexis.

And other than names and nationalities, the images released of Away thus far don't give too much more, erm, away. They're in space. They're headed toward Mars. It's all part of the Mars Joint Initiative. And none if it is going to be easy.