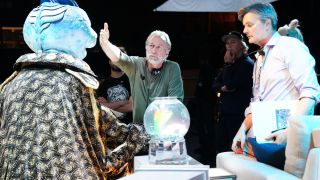 It was only a matter of time before Disney+ threw its hat into the talk show realm. But with Earth to Ned, the streamer is thinking a bit outside the late-night box. The series, which is the second Jim Henson Company production to debut since the platform's big launch — Muppets Now was the first — the program stars host Ned (Paul Rugg), co-host Cornelius (Michael Oosterum), BETI (Colleen Smith), the ship's AI, and features a cute, yet meddlesome Gremlins-like creatures called CLODs, which stands for Cloned Living Organisms of Destruction.

The backstory that adds character and nuance to the series goes as follows: Ned and Cornelius were part of an alien invasion mission with the end-goal of destroying Earth. Once they arrived on our planet, the duo fell in love with the human species and decided that, instead of obliterating our world, they'd do their best to constantly delay the battle plans in order to learn more about people. And what better way to conduct this eye-opening research than by chatting with celebrities on the deck of their spaceship all while taking on the familiar model of a late-night talk show?

"I wanted to do a show that celebrated people and how absurd life is, but also how delightful that can be," executive producer Brian Henson tells What to Watch. With each episode of Earth to Ned's first season now available to stream on Disney+, Henson sheds light on the reasoning for making the series in the first place and discusses the challenges in maintaining his father Jim Henson's legacy as the Chairman of The Jim Henson Company.

This isn't the first time we've seen a puppet hosting a talk show. Sesame Street's Elmo has a new one on HBO Max, there was the T.J. Miller-voiced Gorburger Show on Comedy Central, and ABC toyed around in this space with the meta Muppets Tonight. What was your inspiration behind Earth to Ned and how is it different from these examples?

Brian Henson: We're sort of in an era where particularly, late-night talk shows are often a little too cool for school. They're usually very slick and can be quite negative. What I wanted was a real positive show and that all started with the character of Ned. I just wanted Ned to just be so delighted by people; he just thinks everything they do, even when they do weird, unexpected things or make mistakes, it's delightful to him. This is just to sort of remind the world it is all delightful, this thing that we call society and our relationships and all that. People are inherently delightful and let's remember that. That was sort of, going into it, what I wanted to do. And then Disney+ was looking for a show that was kind of predictable, something [formulaic] where we all know what it is. So we set out to make a show where we knew it was a late-night talk show, but then we totally turn it on its ears by making it with aliens.

You go one step further and put this familiar-feeling talk show narrative inside a spaceship that's buried deep underground.

Henson: Yeah. The set for the show is in a very real-feeling alien spaceship but with an Ikea couch that's dragged into the middle of the space and that's where the guests are beamed into. Hopefully, the delight of the show is the hosts' ignorance. These aliens are so ignorant as to why we do the things we do, but they're also so delighted by it which sort of disarms the guests. Remember, they're not promoting a movie that they've just been in or anything, and that's largely because we don't air right after we shoot the episodes. The results should be evergreen. Ned and Cornelius interview two guests and it'll be a delightful interaction that exists forever and it's always going to be delightful.

What helps make this such a fun show is the way you build out the environment, not just set-wise, but with the CLODs and Ned's cohorts. You really feel like you're out of your comfort zone and deep in theirs.

Henson: Exactly. You don't really want to expose a puppet character to just solely trying to put the show on by themselves. We created Cornelius as his sidekick and BETI as the ship's artificial intelligence to even things out a bit. You know, one of the interview formats that I always thought plays very comfortably is Howard Stern's. I mean tonally, we're in a different place but the way Howard and Robin [Quivers] so effortlessly interact with the guests, and the way Howard can then pull in Baba Booey and the producers, you get these fun discussions that have multiple perspectives, rather than just sort of the expected one-on-one interview. So that's sort of what led us to all of this.

It feels like there's this pervasive notion that puppets in entertainment are reserved for children's entertainment. Have you found people's perception of this type of entertainment changing?

Henson: It's all sort of gone in a big circle because my dad always was doing puppets for adults. It wasn't until Sesame Street which was the first big thing that he did that was strictly for kids. It was such a huge hit that he then had a hard time moving the age of his audience back up again. He had to actually do two pilots of The Muppet Show which were passed on by all three networks in America. One was a Valentine's Day Muppet special with Mia Farrow. And that didn't get picked up because everybody was saying that Muppets were for little kids, because of Sesame Street. My dad was pretty upset about that, so he called his next pilot Sex and Violence with the Muppets and all three networks passed again. In his frustration and doggedness, he went on to Season 1 of Saturday Night Live and did a special set of characters that were particularly adult and offensive.

He was just trying to get the industry to re-accept him as more of an adult entertainer. Iit was while he was there that he got a call from Lew Grade in London who said, "Look, I've seen your pilots that you did. Why don't you bring your team to England and we'll make your Muppet Show." And that's exactly what my dad did; He took everyone to London and did The Muppet Show and then sold it back to America. It took a long time for him to re-convince the industry that puppets can really work for adults. We've sort of been trying to be both ever since. We try to do some stuff that is more mature family-oriented and then some stuff that is really for young kids, particularly educational programming.

With projects like the R-rated Happy Time Murders, the Dark Crystal: Age of Resistance on Netflix and now Earth to Ned, do you find it a challenge to juggle these different types of tonalities and categories which are aimed for different demographics, considering what children's shows like Sesame Street and Apple TV+'s Helpsters are doing?

Henson: The conventional thinking for brand expectation is you should always be appealing to the same audience and you should always be doing it basically the same way so that you're very predictable as a brand. We've always wanted to be a little bit of the naughty boy brand, you know? My dad always wanted to be a little anti-establishment and was always trying to be sort of unexpected. What we want is for the audience to expect something fresh, weird, and different from us. But then we have to be mindful that the audience knows not to take your Sesame Street fans to Happy Time Murders. For the most part, we've found that we can do that and that the audience does know when it comes from us, to ask, "Well, is it for kids or is it for family or is it for adults?" And it just sort of makes us a little bit wilder, which we kind of like being.

There's this humanizing element that comes from puppet entertainment. You can find it in the adventures of Kermit and the gang, in the cuteness of the Podlings in The Dark Crystal, in basically everything about Baby Yoda in The Mandalorian, and now in Ned and Cornelius's comedic banter in Earth to Ned. Can you walk me through the behind-the-scenes work that goes into turning these inanimate objects into emotional focal points for fans?

Henson: Why does puppetry work? That is sort of the basis to that question. There is something inherently delightful to human beings when you take something inanimate and make it alive. There is just something really delightful about that. CGI animation and modern visual effects are really fantastic and they can become perfect illusions but that's not what puppetry or animatronics are. And that's really not what we're doing. This is not a perfect illusion, it's an inanimate object that's being brought to life by people. So that kind of makes it much more an artistic expression.

It is the child inside you that is responding to the delightfulness and that's really why it can work so well, particularly when they're interacting with actors. There's a genuine chemistry and connection that you can capture with the cameras whereas, when you're doing it with CGI, there isn't an actual connection happening at all. It all has to be created, so there can be a coldness to CG-realized creatures. Of course, clever directors can figure out ways to get around that. For instance, when Jon Favreau did The Jungle Book, we made puppets of the animals to work with the actor playing Mowgli so that there was a connection that John could capture. He digitally removed the puppets and put in the CG characters but he appreciated that you need that type of connectivity in the story.

Speaking of animatronics, explain the work that goes into bringing a puppet like Ned to life.

Henson: In designing Ned, I wanted to go very large. For instance: On Farscape, we had a character called Pilot and it was a very successful character because it never moved. As soon as you have to make a character be mobile and be able to walk around and stuff like that, it all gets much, much harder. I thought, let's make a very large host, Ned, who is just basically rooted into the ship so he never moves from that desk. That allows us to do just a really great character. His animatronics are very sophisticated; I don't know how many motors he has in him. 30-something, I think, are just in his head. He's very expressive for a puppet character. And it's very hard to get multiple performers to be able to actually improvise and stay in sync as one character. We have found that we can go pretty effortlessly to two or three puppeteers working one character where they can just totally improvise where it's like they're all in a mind-link together. But going all the way up to six operators, which Ned has, is a toughie. They've done an extraordinary job where now those six performers can literally just improvise material for an hour and it's all pretty incredible. It just works really, really well.