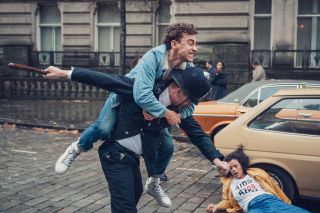 Olly Alexander as Ritchie and Lydia West as Jill battling the police in "It's A Sin." (Image credit: Channel 4)

It’s A Sin has been created by BAFTA-winning writer Russell T. Davies, famous for hit shows such as Doctor Who, A Very English Scandal and Queer As Folk. It follows the rollercoaster lives of a group of young gay men living through the AIDS crisis in the 1980s and features a star-studded cast that includes Keeley Hawes, Neil Patrick Harris and Stephen Fry, with pop singer Olly Alexander taking the leading role.

The five-part drama It's A Sin begins in 1981 when teenagers Ritchie, Roscoe and Colin first meet in London. After finding themselves thrown together, the boys, along with Ritchie’s friend Jill, share each other’s adventures. But with the new deadly AIDS virus on the rise, their lives are tested in ways they never imagined.

Determined to live and love more fiercely than ever, as the decade passes, together they endure the horror of the AIDS epidemic, the pain of rejection and the prejudices that gay men faced back in 1980s Britain when Margaret Thatcher's very anti-gay Conservative government were in charge.

Newcomer Omari Douglas plays Richie’s friend Roscoe, a "wild and brittle" party-boy who’s always on the run, while another newcomer, Callum Scott Howells, stars as Colin Morris-Jones, a quiet and unassuming lad from Wales who’s about to become an apprentice on London’s Savile Row.

Lydia West (Years and Years, Dracula) plays Jill Baxter, Ritchie’s friend from college, who’s described as "straight-talking, funny, and the rock on which they rely."

What else do we know about ‘It’s A Sin’?

Writer and creator Russell T. Davies, famous for Doctor Who, Torchwood plus Years and Years in 2019, has based this drama on many of his personal experiences. Like the characters in It’s A Sin, he was 18 himself in 1981. Speaking about It’s a Sin he said: "I lived through those times, and it's taken me decades to build up to this. And as time marches on, there’s a danger the story will be forgotten. So it's an honor to write this for the ones we lost, and the ones who survived."

Pop singer and actor Olly Alexander, who stars as Ritchie Tozer, says: "I feel like the luckiest lad in the world to be a part of this project. I’ve been a fan of Russell T. Davies ever since I watched Queer As Folk in secret at 14. His work helped shape my identity as a gay person so I’m absolutely over the moon we’ll be working together. The script was amazing to read, I laughed and I cried a lot, it’s a privilege to be helping to tell this story and I’m so excited."

Yes, It's a Sin was a massive hit for legendary British band The Pet Shop Boys back in 1987. It will of course feature heavily in the Channel 4 drama (see the trailer below), along with many other famous hits of the 1980s.

The 'It’s A Sin' trailer

You can see a first glimpse of the drama below. It shows Olly Alexander as Ritchie in a gay London pub, selecting the 1987 Pet Shop Boys anthem, "It’s A Sin," on the juke box.

Filming of It's A Sin began in October 2019 and the five-part drama is due to start on Channel 4 and its streaming channel All4 in early 2021.

In America, "It's A Sin" will be shown on HBO Max.