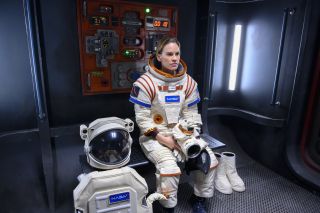 Hilary Swank in "Away" on Netflix. (Image credit: Netflix)

As we continue to break the world we occupy beyond repair, we become more and more interested in outer space. Turns out, Netflix is introducing a new series about just that. Away will feature Hilary Swank and an all-star cast as the head to Mars (presumably to terraform the planet).

Check out the trailer below.

Now, as is custom for a teaser trailer, that tells us basically nothing. So, here's the full description of the streaming giant's new series:

In the near future, a crewed spacecraft is sent to Mars. For this high-stakes mission, a team of elite astronauts are assembled from around the globe. They hail from the United States, Russia, China, India, and Great Britain. If all goes well, they will be away from the place they call home and the people they love for three years. During this time, their relationships both on Earth and in space will be tested, as they struggle to stay alive and stay on track in pursuit of humanity's most important goal. The world will be watching.

There's some pretty solid ambiguity in that description, but too many details before launch never did a series any favors. Either way, we'll have some new content to stream when the series debuts on Netflix on Sept. 4.