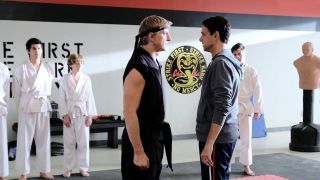 After recently being purchased, Cobra Kai has made the shift from YouTube TV over to Netflix. The streaming giant will be taking the dojo over, bringing us the long-awaited next season sometime in 2021. In the meantime, there are still a lot of folks who haven’t watched the series just yet.

Now, as someone who liked The Karate Kid movies, but didn’t love them, I can get why folks might not be raring to go on this weird little miracle series. Add that to the fact that it was originally produced by YouTube? Nah, no thanks.

Except that’s the completely wrong reaction, because this show is incredible.

If you look at Twitter right now, you might notice you friends starting to pick it up. The commentary’s always the same, with the gist of it being something along the lines of “I’d heard it was good, but this is good,” and they’re right! It is good. Hopped to number one on Netlfix today, good, even.

With that in mind, we’re going to chat about some of the reasons you should absolutely be bingeing Cobra Kai despite the fact that you have infinite streaming options right now.

Its Shift to Netflix

When the series was still on YouTube, a lot of folks had said they wouldn’t be getting a new streaming service simply to stream one show. That’s a fair complaint! There were a few other diamonds in the rough on YouTube TV, but by and large viewers weren’t given a whole lot of reasons to subscribe.

Now it’s on a service that practically everyone has, so what’s holding you back?

The Show is Whip Smart

There was no magic off-camera transformation where Johnny Lawrence (William Zabka) suddenly became a nice guy. When you catch up with one of the few remnants of Cobra Kai, he’s still the same jerk you met all those years ago.

His brutish behavior, along with Danny LaRusso’s (Ralph Macchio) sanctimonious streak, are used to comment both on the franchise’s history and current cultural issues. Cobra Kai has conversations about bullying, race, classism and more, all without having them in the “in your face” fashion that some viewers don’t care for.

Both Nostalgic and Contemporary

There was never a universe where a show called Cobra Kai wasn’t going to play into the nostalgia of the Karate Kid franchise. Not doing so would be both a silly business move and a disservice to fans. With that in mind, the series manages to hit that sweet spot between acknowledging its roots and brining something contemporary to the table. While neither Johnny or Daniel have changed much since high school, they’re given plenty of opportunities to grow in this new series. They even take a couple of them!

The series is very much two relics (though one is admittedly less-so than the other) living in a new time. Both choose not to understand it in their own ways, but they’ll get forced into the presence by the series’ new players.

Speaking of those new players, there are quite a few of them. Both dojos (Cobra Kai for Johnny and Miyagi-Do for Daniel) take on new students. While the war between the two OGs continues on, a different kind of battle will be waged between their students.

The majority of the first season focuses its attention on Miguel Diaz (Xolo Maridueña), Cobra Kai’s primary apprentice. If you’re raising an eyebrow over stuck-in-the-80s and acutely racist Johnny Lawrence training a teenage Mexican American karate, you should be. You should also know that these two’s relationship is undoubtedly one of the best parts of the series. They’ve got some big Odd Couple vibes going, but it works out. Cobra Kai’s dojo will eventually expand to include Hawk (Jacob Bertrand), Aisha (Nichole Brown), Demetri (Gianni Decenzo) and more.

Meanwhile, Miyagi-do appropriately finds itself much smaller. The full of Daniel’s dojo is a bit of a spoiler, so we’ll leave some of it unsaid, but the trailer already makes it clear that it includes Johnny’s son, Robby Keene (Tanner Buchanan).

Cobra Kai is predominantly funny with some action sprinkled in. You can’t have Johnny Lawrence trying to figure out how to exist in 2018 without some laughs. But make no mistake, this series will absolutely make you cry when you least expect it to. Sometimes its with small moments that are sprinkled into larger narratives. Others, its used as the driving force of a reunion.

It’s not the focus of the series by any stretch of the imagination, but keep a box of tissues handy just in case.

Legacy and nostalgia are different. Nostalgia has almost become a dirty word among some critics (it’s not), while legacy focuses on honoring that past without overtly drawing attention to it. With everything said above about how Johnny and Daniel will have to confront their inability to grow, it’s easy to assume that Cobra Kai may spit in the face of the franchise that built it, but nothing could be farther from the truth. While Johnny (eventually) learns to use his pain for good, Daniel is forced to learn some of that nuance Miyagi tried to help him understand all those years ago. Both of which have to do so while trying to foster in the next generation, making for some quality storytelling.

If paragraph reads like its waxing poetic, it’s because it kind of is. Whether you’re a Karate Kid superfan or you just casually enjoy the series, you will find joy here. Cobra Kai has absolutely no right being as exceptional it is, and it’s right at your fingertips!