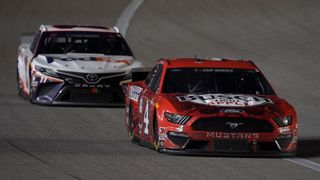 NASCAR will roar into New Hampshire this weekend for the Foxwoods Resort Casino 301, a race that comes just weeks before the sport’s playoffs are set to begin.

NBCSN, the network’s sports offering, will carry the race at 3 p.m. Eastern time Sunday, Aug. 2. NBCSN can be accessed via cable or satellite TV packages, or through several streaming services that offer it. You can watch the Foxwoods Resort Casino 301 as part of a free trial of Hulu With Live TV or YouTube TV.

Coming off of a win at Kansas Speedway July 23, Denny Hamlin is fourth in the NASCAR Cup Series standings. He's chasing Kevin Harvick, Brad Keselowski and Ryan Blaney in the standings, as they are in first, second and third place, respectively. Despite leading the Foxwoods 301 for a third of the race last year, Hamlin came in second behind Harvick.

Here are the top ten standings in the NASCAR Cup Series heading into the Foxwoods Resort Casino 301.

A TV or computer screen won’t be the only place fans can catch this race. Unlike many other major sporting events, this race will open its doors to the public  — albeit with social distancing requirements and other safety protocols put in place amid the ongoing coronavirus pandemic.

After this weekend’s event, only a handful of races will remain until the regular season finale at Daytona International Speedway on Aug. 29. The top 16 drivers will advance to the playoffs after that contest, and the field will be pared down in the following weeks until four remain for the NASCAR Cup Series Championship at Phoenix Raceway on Nov. 8.

Harvick came away as NASCAR’s Cup Series champion in 2014 and Keselowski claimed the title in 2012. Hamlin has never won the crown.

Hamlin has won five races this year, while Harvick has won four. Keselowski has claimed two checkered flags this year.

The Foxwoods Resort Casino 301 will air on NBCSN, which is available on cable or via satellite. But if you’re sticking with streaming, there are several options for watching the race.

Hulu With Live TV , FuboTV, and AT&T TV Now each cost $55 a month, and each service has NBCSN. YouTube TV also has NBCSN, but it is more expensive at $65 a month. Sling TV, meanwhile, offers NBCSN in its Sling Blue package at just $30 a month.

Sports fans should be aware, because there are certain channels you'll be missing by going with Sling's Blue package. For example, ESPN is not offered on the Sling Blue plan, but it is included on Sling Orange. Racing fans who want to watch NASCAR and Formula 1 can buy both with Sling Orange + Blue for $45 a month.