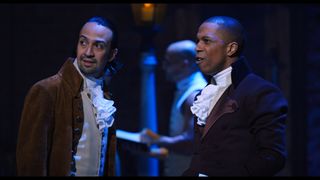 When the phrase “Disney movie” is used, the immediate association with the brand is the vast library of animated, family friendly features that made Walt and his successors into titans of media and theme park entertainment. But Disney is much more expansive than that core facet of their identity, and whether through acquisition of intellectual properties and the Fox studio catalog, or by branching out and producing films that are a bit outside the default Disney brand, Disney has managed to amass a vast library of films that make Disney+ more than just the platform to revisit all your childhood favorites. We’d like to highlight just a few of those great movies that make the platform more dynamic than you might expect.

It doesn’t exactly blow anyone’s mind that Star Wars was one of the best acquisitions that Disney has made in the last decade. But I would encourage viewers to approach the original film, not as an installment in a greater franchise, but as an individual movie, a weirdo piece of outsider cinema that sparked the imagination of the world in the late 1970s. Star Wars is a document of hope and optimism from a time where the cinematic landscape was bleak and wearied by the Vietnam War, and its more gonzo elements opened a world that people demanded to see more fully realized. Though Disney+ offers a more “Macklunky” version of the film that retains many of George Lucas’ controversial CGI revisions, it’s still easy to appreciate Star Wars as one of the greatest adventure films ever made.

10 Things I Hate About You is a quintessential teen rom com of the turn of the millennium, translating the melodrama of Shakespearean aristocrats into the struggles of dating in high school. Focused on a convoluted machination that sees Cameron (Joseph Gordon-Levitt) conspiring to get Kat (Julia Stiles) and Patrick (Heath Ledger) to start dating so that he can date Kat’s sister Bianca (Larisa Oleynik), the film adapts Shakespeare’s The Taming of the Shrew into a story of teenage angst and the necessary growing pains of developing empathy for our peers. It’s a funny, sweet, and witty film that shouldn’t be overlooked simply because it’s the first time to show up in the alphabetical queue.

Even though it is an animated film, Wes Anderson’s adaptation of Roald Dahl’s Fantastic Mr. Fox is not what you would generally consider a Disney film, and not just because it was made by 20th Century Fox. It’s stop-motion animation developed in Anderson’s trademark stagey style, telling the story of a fox (George Clooney) who, in a bout of midlife crisis, returns to his past life of thieving from local farmers, only to drag the entire local ecosystem with him into his pursuit of youthful ego. What follows is a characteristically charming story of familial growth across generations, punctuated by some clockwork slapstick and witticisms that one comes to expect from Wes Anderson.

When one thinks of inspirational sports movies, the terms “Africa” and “chess” are rarely what first comes to mind for the average American. That’s frankly a shame, though, since Queen of Katwe is one of the best examples of the genre to come out in a long while. Following the story of 10-year-old Phiona (Madina Nalwanga) growing up in the titular Ugandan slum, her world is radically transformed when she falls under the tutelage of missionary Robert Katende (David Oyelowo). Phiona proves to be something of a chess prodigy, and she has to decide whether pursuing her dream is what is truly best for her and her impoverished family. Lupita Nyong’o gives an excellent supporting performance as Phiona’s mother, and the resulting film is a heartwarming story of self-actualization and embracing one’s talents.

Many folks like to point to the big crossover spectacle of the Avengers films as the pinnacle of the Marvel Cinematic Universe, but I think the franchise best succeeds when it is using the fantastical settings and superhero archetypes at its disposal to tell deeply personal and emotional stories. Director James Gunn is one of the closest things we have to an auteur filmmaker within the MCU, and Guardians of the Galaxy Vol. 2 is the distillation of what makes his filmmaking oeuvre shine. The Guardians’ greatest foe isn’t the machinations of Peter Quill’s (Chris Pratt) maniacal cosmic tyrant of a father (Kurt Russell), but their own lifetimes of familial trauma and abuse, which they are forced to overcome not just to save the galaxy, but their own sense of self. While being just as funny as its predecessor, Vol. 2 ends up being one of the most emotionally devastating comic book movies ever made.

Jane is the kind of documentary that comes along very rarely, using previously unseen footage to craft a portrait of a moment in time for one of the greatest scientific researchers of all time. Jane Goodall’s life is not exactly a mystery, but Jane uses footage of her earliest expeditions to show how her outsider thinking radically transformed the fields of primatology and anthropology with regards to studying chimpanzee populations. The recovered footage is itself absolutely gorgeous, and you’re left with the impression that speaking truth to established, stubborn modes of thinking is not only extremely taxing on the individual, but is also necessary in the pursuit of scientific accuracy.

If you have not yet seen Hamilton live on stage, the stage recording available on Disney+ is the next best thing and is, in some respects, even more dynamic. The story of the Revolutionary War and America’s founding as seen through the eyes of Alexander Hamilton (Lin-Manuel Miranda) would be an epic in its own right, but its reinterpretation as a hip-hop musical centering people of color as the voices of revolution and change makes this one of the most prescient symbols of hope to be mined from the years of the Obama administration. And with the benefits of cinematography and editing, the stage play is allowed the expressiveness of close-up shots and perspectives that would be impossible from auditorium seating, so even if you have seen the show before, you haven’t seen it quite like this.

When Beyoncé says that she wants to make a collaborative visual album that reinterprets the broad motifs and story beats of The Lion King into a celebration of Black identity and the African diaspora, you shut up and listen. Black Is King isn’t what one thinks of as a traditional narrative, but is instead a musical journey that captures the beauty of Black voices and pan-African culture, creating a surreal collage of artistry unlike anything else you’ve ever seen. Disney isn’t exactly known for its forays into experimentalism, so Black Is King is not just unique for Disney+, but is an anomaly for Disney as a whole that shouldn’t be ignored.