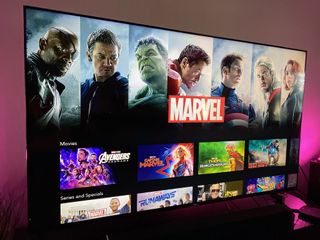 There have been a lot of Marvel movies made in relatively short time. As in, like, a little more than a decade. From 2008's Iron Man to the end of "Phase 3" with Spider-Man: Far From Home (I'd argue Infinity War should have marked the end of that phase of the Marvel Cinematic Universe, but nobody asked me) it's been one hell of a ride.

But it's a ride that many of us have been on for years now. What to do if you're new to the MCU and you're looking for the best way to experience all of the Marvel films in order?

So here's how we'd go about watching the various Marvel Cinematic Universe movies in order. Both orders. And where you can actually watch all these movies.

How to watch the Marvel movies in chronological order

This takes you straight through the timeline — more or less — in terms of what year the movie takes place.

Things kick off with Captain America: The First Avenger . It actually was the fifth movie from Marvel, but it's the furthest back, with Steve Rogers doing his thing in World War II. And we move forward from there.

That said, there's a little wiggle room here. Some of the films don't have exact dates, though it's easy enough to see where they fit between events in the other movies.

Watch the Marvel movies by their release date

The other way we love to watch Marvel movies is in the order in which they were released. That's perhaps more helpful to those of us of a certain age who where there the first time around, so we remember that very first utterance of "I am Iron Man" in a far different way than if it came three movies in, via the chronological order.

Same goes for Captain Marvel . It's a great film in its own right, but it's also very different if it's the second flick you watch, versus coming very late in the series, after a whole mess of stuff (again, no spoilers) has happened.

So pick your poison. If you're going to watch the Marvel films in the order in which they were released, this is how you'll do it.

Where to watch all the Marvel movies

This isn't quite as simple as you might think. Technically speaking, Marvel now falls under the (rather large) umbrella of Disney. And that means there's a lot of Marvel that's available on Disney+ , the streaming service for Disney.

But not all of it.

The reason? Lawyers and money, of course. (And the fact that occasionally other studios have made Marvel movies.) But don't worry, we've got you covered. If it's not on Disney+, we'll show you where to find it.

Following are links to all the Marvel movies on their respective streaming services. (And we're going to stick with release date order for this one, folks.)