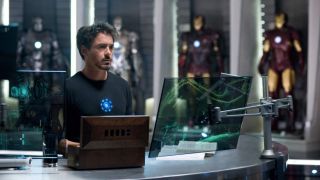 When someone asks how to watch Iron Man 2, you have to wonder if they're aware at just how much better Iron Man 3 is. No matter. This is the one where Tony Stark meets Ivan Vanko and Whiplash, Rhodey gets a suit, and we first meet Black Widow. But we're not going to spoil anything else here — you have to watch the movie.

The cool thing about Iron Man 2 is that it's just as easy to find as the original Iron Man. Or Iron Man 3, for that matter. Or any of the movies from the Marvel Cinematic Universe.

The real question you have to ask yourself is this: Do you feel lucky? And do you want to buy Iron Man? Or rent it? Or do one of those subscription service things.

How to watch Iron Man 2 on Disney Plus

Hands-down, the best way to watch Iron Man 2 (or any of the other Marvel movies) is on Disney+. That's the streaming service from Disney that includes all of the Marvel flicks, from the original Iron Man through the latest superhero series. Disney+ also is home to all things Star Wars, the Pixar library of films, and NatGeo.

Iron Man 2 also is available if you get yourself the Disney Plus bundle, which also includes the basic Hulu plan and ESPN+ for just $12.99 a month. That effectively gets you three streaming services for the price of two and is one heck of a deal.

How to rent or buy Iron Man 2

It's possible the price may vary a little bit depending on where you live, but you get the idea. You'll be able to watch Iron Man 2 for about the same price as an overpriced cup of coffee.

Is it better to watch Iron Man 2 on Disney+ or somewhere else?

Here's the thing: There's not actually a huge difference whether you watch Iron Man 2 on Disney+ or from, say, iTunes. The movie is the movie. Where you might find a difference is in the ancillary content, where a service like Amazon Prime Video might give you more information on actors and scenes, available when you pause the action.

But if all you want is the movie itself? Everything is mostly the same.

For our money, we'd go with watching on Disney+ due to the ability to pay the equivalent of three rentals and have a month to watch all the Iron Man movies, and all the Thor movies, and all the other MCU movies. And everything else on the Disney+ service.