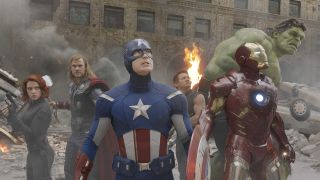 For those who don’t know how to watch The Avengers, we’ve got you covered. This iconic film was the culmination of five films starting in 2008 that set the stage for a world of comic book movie madness. When these movies first began to release, DC had been at the top of superhero movies with Christopher Nolan’s Dark Knight trilogy. Little did they know, the traditional model of the superhero action film was about to be shattered.

Directed by Joss Whedon, the events of The Avengers are set into motion by the actions taken by the film’s main villain, Loki. We first met Tom Hiddleston’s beloved character, the Norse god of mischief, in 2011’s Thor. His sinister intentions become clearer as time goes on, but Loki’s actions force S.H.I.E.L.D. director Nick Fury, portrayed by Samuel L. Jackson, to activate the Avengers Initiative.

Bringing together six of the most influential comic book characters of all-time (Iron Man, Captain America, Thor, The Hulk, Black Widow and Hawkeye), The Avengers sets the tone for 17 films that followed it with its incredible comedic timing, groundbreaking action and ingenious plot weaving that paved the way for what came next.

How to watch The Avengers on Disney+

Arguably the most pivotal film in the Marvel Cinematic Universe is available to stream on Disney+ for a reasonable rate. If you’d prefer to subscribe on a monthly basis, it’ll cost you just $6.99 per month. Or, if you’d prefer to pay for a year of access to the premier streaming platform, you can pay a reduced price of $69.99 — The  equivalent getting two months for free.

Another route is the Disney+ Bundle, which provides access to three great streaming services for the price of two of them. For $12.99 per month, you can gain access to Disney+, ESPN+ and Hulu — Three of the most coveted streaming platforms ever. This way, you can get a bit of everything without breaking the bank.

This is one of the best options for families looking to consolidate their streaming without having to spend a ton of money or rack up different monthly charges.

How to watch The Avengers everywhere else:

If you’d prefer not to subscribe to Disney+, there are a handful of options available to you. For those who have access to Amazon Prime Video, you can stream Marvel’s The Avengers as part of your plan. It’s also available on other platforms including the iTunes store, Google Play and Vudu. The price ranges, but it generally costs about $2.99 to rent and $19.99 to purchase.

Should you watch The Avengers on Disney+ or somewhere else?

As part of Disney+, you’ll also gain access to the handful of MCU television series that is currently in production. Those confirmed include The Falcon and the Winter Soldier, WandaVision, Loki, What If...? and more. This is the definitive home of the MCU and even though it doesn’t quite have everything, it’s a great place to binge-watch these iconic

Well, that’s a personal choice, but there are a lot more benefits to a Disney+ subscription than there are to simply rent the film elsewhere. If you’re solely interested in watching this film from the MCU catalog and you already have an Amazon Prime subscription, then your decision is probably already made.

However, Disney+ provides a lot more than a one-off viewing experience. With Disney+, you gain access to a whole wealth of MCU content including all of the Avengers films and the stories that set the landscape for those blockbuster pictures.