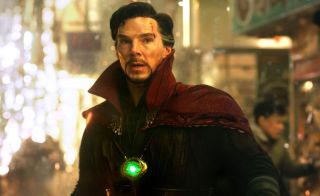 Marvel fans looking for how to watch Doctor Strange certainly have options for watching the 2016 superhero origin story — but one streaming service may be the best option.

If you haven't managed to catch up on these movies, this may be a big spoiler: Doctor Strange, played by Benedict Cumberbatch, may have been the most consequential character in the Marvel Cinematic Universe, given his ability to predict the future, and later, his and his friends' power to basically teleport heroes to the big final battle against Thanos and his army.  And this is his story.

But before all that, he was a rude but successful neurosurgeon whose hands and career are mangled in a car wreck. He learns new powers that allow him to bend reality and time, however, and the rest is history. Doctor Strange also features Rachel McAdams, Tilda Swinton, and Mads Mikkelsen.

Want to find out how to watch Doctor Strange? Then keep reading!

How to watch Doctor Strange on Disney Plus

The most obvious solution to your streaming search is simply to sign up for Disney+. After all, Disney owns Marvel Studios (along with a sizable portion of the entertainment industry) and offers Doctor Strange and movies about his other superhero friends on one streaming service.

Disney+ goes for $6.99 per month or $69.99 a year. For that, you get access to a goldmine of content, from classic Disney movies to Star Wars and The Simpsons.

Plus (pun intended), you can bundle Disney+ with ESPN+ and Hulu for $13 per month. ESPN+ is a supplementary streaming service from the worldwide leader in sports that offers some live games and shows, and Hulu, of course, carries plenty of TV shows and some movies.

How to watch Doctor Strange elsewhere

If you're not interested in signing up for Disney+, you have other options.

You could always rent or buy Doctor Strange from places like Amazon Prime Video, Vudu, iTunes or YouTube. That usually runs a few bucks for renting it and $20 for buying it. Just like Blockbuster, but on your computer ... or something.

Meanwhile, it appears you can catch Doctor Strange on television streaming services like Hulu With Live TV, which runs $55 per month, FuboTV for $60 per month or Sling's Blue package for $30 per month. Each of those services comes with a free trial and includes a variety of channels that may interest you.

Check out our guides to Hulu With Live TV, Sling and FuboTV.

But if you're a diehard Marvel fan, you'd be hard-pressed to find a better option that Disney+. Once you sign up for a subscription, you can watch Doctor Strange all you want. Or you can mix it up with other Marvel heroes and the Star Wars saga. Or watch an old movie about a man who gets turned into a dog while he's running for district attorney (I didn't make that up, I swear.) It's totally up to you.