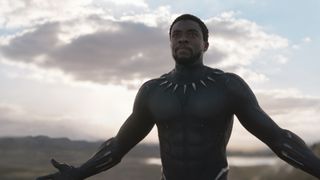 You have options when it comes to choosing how to watch Black Panther. You could rent it or buy it, or you could go the subscription route. And in this case, we're going to unequivocally recommend the latter, because it comes with some extras that celebrate Boseman — and that you can't get any other way.

How to watch Black Panther on Disney Plus

The best way to watch Black Panther is on Disney+. Full stop.

First off, you get it in full 4K UHD resolution and HDR, which is sort of a must-have these days. And along with that Disney+ subscription, you'll get access to every other MCU film in the vault, from the original Iron Man on down through the Infinity Saga, and (eventually) into Phase 4.

You'll also be able to watch the other films in which Black Panther (the character) made an appearance — Captain America: Civil War was first. And then there are Avengers: Infinity War and Avengers: Endgame. T'challa didn't appear too much in that final film until the end, but it was a pivotal part that remains one of the most meaningful in the series.

Disney+ costs $6.99 a month or $69.99 a year. And you can watch all you want with that subscription — Black Panther over and over again.

You're also able to watch Black Panther with the Disney+ bundle, which gets you Disney+, the basic Hulu plan and ESPN+ for just $12.99 a month — essentially getting you three streaming services for the price of two.

How to rent or buy Black Panther

If going the Disney+ route just isn't going to happen for you, there are still plenty of options to rent or buy Black Panther. The movie is available on Google Play, Amazon, iTunes and Vudu — and you can get the same 4K and HDR treatment there as you can on Disney+, so Black Panther will look as good as it possibly can.

That'll cost you about $4 to rent or $20 to buy, same as most other MCU flicks. (The price may vary a little bit depending on your country.)

Should you watch Black Panther on Disney+ or somewhere else?

If you want to rent or buy Black Panther, good on ya. But Disney+ may well be the best way to go here if for no other reason than Disney (which owns ABC) has included Chadwick Boseman: A Tribute for a King — A Special Edition of 20/20 as an extra with Black Panther. It's hosted by ABC News' Robin Roberts and "features tributes that have poured in from celebrities, political figures and fans across the world, special words from those who starred alongside him and knew Boseman best and shine a light on the medical condition he privately battled."

If all you want is Black Panther and only Black Panther? By all means, rent away. But if you want the rest of the MCU and all the extras that come with them, definitely consider a Disney+ subscription, even if you don't intend on keeping it forever. There's a ton of content there, from Marvel, to Star Wars, Pixar and NatGeo.