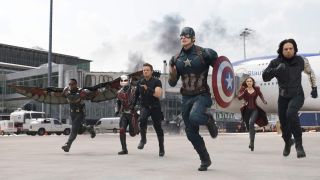 Looking to find out how to watch Captain America: Civil War? Look no further, because we have the answer.

Perhaps it's fitting that this movie came out during the last presidential election year. After all, it's full of conflict and division, as the heroes of the Marvel Cinematic Universe debate over their future. Driving the storyline is personal and philosophical differences between the two leadership figures, Captain America and Iron Man, played by Chris Evans and Robert Downey, Jr., respectively.

Elsewhere, we have a laundry list of heroes in Captain America: Civil War, including the introduction of Tom Holland as Spider-Man and Chadwick Boseman as Black Panther.

Enough reminiscing. Let's get down to business.

How to watch Captain America: Civil War on Disney Plus

The Marvel Cinematic Universe certainly is vast. About two dozen movies have been made about these comic book heroes, and they're not even done! So having all of these movies in one place may be the most logical option for Marvel fans.

That's where Disney+ comes in. The streaming service from Disney carries Captain America: Civil War along with other MCU movies, Star Wars movies and shows, The Simpsons and classic Disney content. It costs $6.99 per month or $69.99 per year. With this, you can watch a Captain America movie one day and switch over to Iron Man the next. All you do is pay for the subscription, set it up on any of the popular devices that supports Disney+ and start watching. It's pretty simple.

To sweeten the pot, Disney is offering a bundle with Hulu and ESPN+ for $12.99 per month. Hulu is the streaming service known for carrying the latest TV shows and some movies, while ESPN+ is the supplementary service from ESPN that carries some live sports as well as original content.

If a Disney+ subscription doesn't seem like your jam, you have other options as well.

You could always rent or buy Captain America: Civil War. That would involve going through a service like iTunes, Amazon Prime Video, YouTube, Google Play or Vudu and paying a few bucks to rent or around $20 to buy it. If you rent it, you have access to it for a few days, and buying it keeps it on your device. It's pretty straightforward.

But if you are a Marvel fan and plan on watching this and other superhero movies for a while, it's hard to go wrong with Disney+. Again, you just pay a subscription and fire it up. Watch as much or as little as you want.

Seems like an easy decision, but the choice is yours.