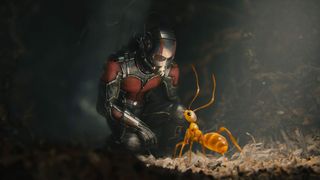 If you're wondering how to watch Ant-Man, chances are you like to root for the little guy.

In this 2015 superhero origin story from Marvel Studios, Paul Rudd plays a cat burglar named Scott Lang who becomes pint-sized hero dubbed, obviously, Ant-Man, bringing with him of the actor's charm and humor. Seriously, when's the last time you weren't happy to see Paul Rudd in a movie?

But enough about Paul Rudd. Here's how to watch Ant-Man.

How to watch Ant-Man on Disney Plus

The quick and easy option for watching Ant-Man is simply to sign up for Disney+. The streaming service from the house of mouse costs $6.99 per month or $69.99 a year.

If you're a big Marvel fan, Disney+ is definitely your best bet for watching Ant-Man and all of his friends. Besides the trove of superhero movies ready for streaming, you'll find Star Wars, Pixar and classic Disney movies at your fingertips. All you have to do is pay for a subscription, and stream it when you want. Easy peasy.

And to sweeten the pot, you can bundle Disney+ with Hulu and ESPN+ for $13 a month.

How to watch Ant-Man elsewhere

Remember renting and buying movies? Turns out you can still do that! I was surprised too.

You can rent or buy Ant-Man from various services for about $4 and $20, respectively. That includes Amazon Prime Video, Vudu and iTunes.

Renting a movie might be appealing when it first comes out, because it may not yet be available on a subscription-based streaming service. But Ant-Man has been out for a few years and is currently streaming on Disney+, and a yearly subscription to that service is only about three times as much as buying just one movie.

So unless you're really, really into shrinking superheroes, Disney+ is probably your best option. That way, you can try some other, taller superheroes as well.