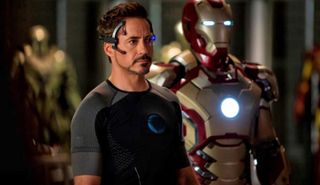 Ask me how to watch Iron Man 3 and I'll ask you if you mean with tears, or without. Because Iron Man 3 perhaps has the most feels out of the whole trilogy. It also has some of the biggest laughs, with Tony taking on a kid who gives as good as he takes, Sir Ben Kingsley as the biggest bad guy who wasn't — and Pepper finally gets her due.

But, yeah. There are are feelings in Iron Man 3, which is the third and final standalone Iron Man movie, and the first movie in Phase 2 of the Marvel Cinematic Universe.

But how to watch Iron Man 3? You've got options.

How to watch Iron Man 3 on Disney+

The best way to watch Iron Man 3 is on Disney Plus. That's it. That's the tweet. Sure, you can watch Iron Man 3 on other services (we'll cover those in a minute), but Disney+ is the best way. You'll get the full Iron Man 3 experience, plus extras, in full UHD 4K super ultra awesome resolution, and in high dynamic range.

Or you also can watch Iron Man 3 all you want with the Disney+ Bundle, which also includes the basic plan for Hulu and ESPN+ for just $12.99 a month. That essentially gets you the three services for the price of two, and it's definitely worth thinking about.

How to watch Iron Man 3 everywhere else

If you've got access to pretty much any other streaming catalog, you've got even more access to Iron Man 3. You can rent or buy from Amazon Prime Video or Google Play, from Vudu or iTunes. Your call.

There's not a huge difference from one to the other — it's the usual one-off scheme. Rent Iron Man 3, watch Iron Man 3. Buy it and it's yours. The price may vary a tiny bit depending on the country in which you live, but here in the States you're looking at about $4 to rent, and $20 to buy.

Should you watch Iron Man 3 on Disney+ or somewhere else?

Look, we're partial to Disney+ for any number of reasons, but mostly because for one monthly subscription fee you get a ridiculous amount of content. And not just the Iron Man trilogy, but the entire Marvel Cinematic Universe. All the Avengers movies. Ant-Man. Spider-Man. Wolfman. (I made up that last one.)

That's a much better deal than just renting Iron Man 3. So basically if there's any chance at all that you're going to want to watch more than three MCU movies, go ahead and get at least a month's worth of Disney+. You'll thank us later.

Plus there's everything else that DIsney+ has on board — and it's a lot.