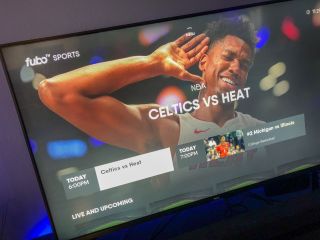 Fubo TV is an excellent option — especially if you're way into sports. (Image credit: CordCutters)
FuboTV

ADD-ONS: FuboTV also has a wealth of other options, including even more sports, and more International options.

Sure, it's got a lineup of channels that you can put up against any other comparable plan on any other service. And it's got the add-on features you look for in this sort of thing.

But Fubo TV also has a pretty big leg up on the competition: It streams sports (not all sports, but some sports, anyway — or at least sports back when where were sports to be sported) in 4K resolution.

Yeah, we could nitpick things to death, like "what you really mean is upscaled content blah, blah blah." But here's the thing: Upscaled or not, once you watch sports in 4K, you're going to want to watch all sports in 4K.

Fubo started back in 2015 as an all-sports service at the super-low price of $7 a month. A couple years later, though, it went more mainstream, added more channels, and got a big-boy price to go with it.

In the summer of 2018 it streamed its first sports event in 4K — the final rounds of the FIFA Men's World Cup. Since then, it's continuously streamed a smattering of games and events in 4K, including the 2019 Women's World Cup.

Prices went up in the summer of 2020, adding $5 across the board. At the same time, it lost the Turner family of channels but gained Disney.

Fubo TV still has those two sets of channels, which you can find below. But it now has four plans from which you'll choose when you sign up for service.

Here's how things break down:

Some of Fubo TV's plans come with a free one-week trial.

A big change for Fubo in the fall of 2020 is the addition of the Disney family of channels. That includes ESPN, which has been a pretty gaping whole in the lineup before August.

Following are the channels available in the main Fubo TV lines — the Standard plan, and what's included in Fubo Extra.

Fubo TV has a couple upgrades that aren't included by default in the standard package, but can be added separately.

Cloud DVR Plus costs $2.50 a month and increases your save space to 500 hours.

Family Share allows three devices to stream at the same time. It costs $1.50 a month.

Fubo TV has a number of add-on packages available.

The first you'll see is Sports Plus with NFL RedZone. It comprises:

The Fubo Cycling package actually has more than just cycling in it, because it also throws in the International Sports Plus package for free. You'll get:

The Fubo Extra Package is built in to the Fubo Ultra plan, but can be added to the Standard and Family Plans. It includes the channels seen in the chart above.

The Adventure Plus Package includes:

The Latino Plus Package includes the following channels:

Rai Italia gets you Italian coverage of Seria A and Coppa Italia soccer, along with news, shows, and movies.

Fubo TV has two premium options from which to choose.

The Showtime suite of channels costs $10.99 a month. With it you'll get:

And AMC Premiere is available for $4.99 a month. With it yo'll get new show episodes ad-free, and select full seasons, bonus content, uncut movies and more.

Does Fubo TV stream in 4K?

Fubo TV is one of the few ways you can watch live sports in 4K resolution in the United States. We're not going to nitpick too much about the fact that you're almost certainly watching an upscaled feed (they're at the mercy of the content provider). The simple fact is that a 4K stream looks better than a stream that is not 4K.

And basically it's going to ruin you for anything else.

The bad news is that you're only looking at a handful of games on the 4K schedule.

Fubo TV has a mix of live channels that should be able to compete against pretty much any other service. And it's one of the few ways to watch sports in 4K in the United States.