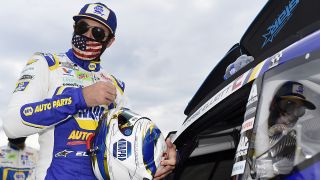 Chase Elliott looks to get back on track at the Consumers Energy 400 after ranking ninth in his last outing. (Image credit: (Photo by Jared C. Tilton/Getty Images))

Only six races remain until the Chase for the Cup begins, which makes the results of Sunday’s Consumers Energy 400 race all the more impactful.

Beginning at 4:30 p.m. eastern time on Sunday, August 8, the action will be broadcast live on NBCSN. In addition to being accessible via satellite or cable TV packages, the race is available on multiple streaming services. To catch the Consumers Energy 400, you can sign up for a free trial with Hulu With Live TV or Sling TV.

Here’s What to Expect from the Consumers Energy 400

It’s been a great week for Brad Keselowski, who placed first last weekend in New Hampshire, tying Fireball Wallace at No. 24 on the all-time Cup Series wins list with 33.

Keselowski, who notched his third win of the year and 15th top-10 finish, was subsequently rewarded with a contract extension from Team Penske that draws another big name from the free-agent pool for the looming offseason. The 36-year-old is just 81 points behind the No. 1 ranked Kevin Harvick, who is looking for his first win since the Big Machine Hand Sanitizer 400 in early-July.

Not far behind him with 688 points and a season-high five wins, Denny Hamlin of Joe Gibbs Racing will look to get back to his winning ways. Hamlin has been dominant as of late, placing second in New Hampshire and winning the Super Start Batteries 400 before that. Considered No. 1 in the most recent Power Rankings by Nascar.com, Hamlin has been the clear-favorite despite underrated competition in recent weeks.

August is jam-packed with high-intensity action as this marks the first of to double-headers in the month. Whoever comes out on top of these two matches will be in spectacular standing as racers battle for positioning in the playoff standings.

A dark horse candidate to take over in Irish Hills is Chase Elliott of Hendrick Motorsports. Having clinched a playoff spot with his win earlier in the season, Elliott needs to step up in order to fend off Joey Logano and Martin Truex Jr., who are both within 12 points from his No. 5 rank in that category.

Without fans in the stands, racers need to lock in and keep their eye on the prize: The Round of 16 beginning on September 6 at Darlington Speedway. After an unprecedented season both on and off the raceway, the stakes are as high as they’ve ever been. For those falling behind in the standings, only six opportunities remain to gain some traction and earn those final playoff spots.

As previously mentioned, NBCSN is proudly broadcasting the event on Sunday afternoon and will be available through applicable cable and satellite TV packages. For those of you who don’t have that station available to you, there are a variety of options that could work for your household.

At $55 per month, Hulu with Live TV offers access to NBCSN so that you can keep up with the race. The same can be said for the Sling TV’s Blue package at $30 per month, though the variety of channels is limited for sports fans. If you want an all-inclusive deal featuring NBCSN and crucial sports channels like ESPN, you should consider the Sling Orange + Blue package available at $45 per month.

Other options include FuboTV and AT&T TV Now at $55 per month. You may find that you prefer the options and layout provided by YouTube TV at a monthly rate of $65.