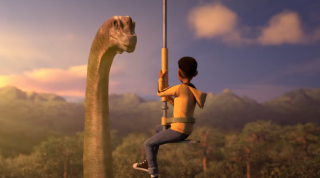 This isn't the first we've heard about Netflix's new Jurassic Park flavored animated series Jurassic World: Camp Cretaceous, but things have been relatively silent since that first announcement. As is customary for John Hammond and his deeply secretive parks, we expect there will be a bit more of a buzz now that we've gotten this first trailer.

Doesn't matter if it's live action, classic, or digital animation. That theme will always give me goosebumps.

As you've seen, the concept for Jurassic World: Camp Cretaceous is pretty simple. The park is open, and this time it's open for tween kids in a summer camp kind of capacity. It's an absolutely terrible idea, but no one running this park has ever really been known for their foresight.

You can join the campers to get up close and personal with all your favorite dinosaurs (and maybe a few of them that scare the pants off of you) on Netflix September 18th, 2020.