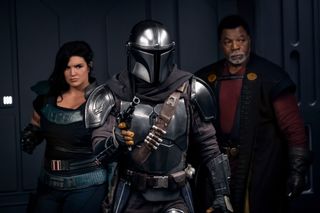 We're inching ever closer to the second season of Disney+'s smash hit The Mandalorian. Season 1 wowed fans in ways they hadn't come to expect in stories outside of the Skywalker Saga. Now, we're just half a month away from learning more about Mando (Pedro Pascal) and his complicated child.

In honor of the approaching release, Disney+ has released four new character posters.

We're not sure why the beach filter's turned up so high either. But, outside of being over-warm, they're your pretty standard character fare. These are all characters we know, so these aren't revealing anything surprising. Though can we all take a moment to acknowledge Gina Carano's bicep? Flex, girl.

As mentioned on the posters, (as well as everywhere else on the internet because Disney has those marketing dollars) you'll be able to watch Season 2 of The Mandalorian October 30th 2020 on Disney+.

Yeah, we still want to know who Sasha Banks is playing, too!