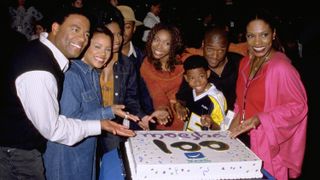 Brandy as Moesha celebrates the 100th episode of the show on UPN. (Image credit: Getty Images)

Representation Matters. It’s a phrase that is used for a lot of groups, and in a lot of contexts, but the core message still resonates. It is valuable when a group has a chance to see people like themselves in the art, culture and greater world around them. Netflix has been doing the work of representation for many years, and they’ve taken another big (and funny) step forward. Netflix is bringing seven classic Black comedies to their streaming service in the United States.

These shows may sound unfamiliar to some of you, but to fans and families in the Black community they were a consistent, hilarious presence on TV from the mid 1990’s to the late 2000’s. They also came from a time where there were less chances for shows with mostly Black casts telling Black stories to make it on the big four networks, which was why these shows came from UPN, The WB and The CW.

Netflix let us know that they didn’t pick these particular shows at random, either. The streaming giant has had an initiative for several years called “Strong Black Lead”. The team behind it has helped bring movies and other content from Black creators to the service, but they’ve done so much more. They created several fantastic podcast series, including “Strong Black Legends” hosted by Legend in Training Tracy Clayton, “Strong Black Laughs” and “Okay, Now Listen”. Many of these shows gave Black actors, writers and directors a chance to tell their stories in a podcast format that is overwhelmingly led by white voices.

Fans played a big role in the move to bring in these seven shows onto Netflix. In the promotional video shown above, stars from the shows confirmed that Netflix subscribers had used email and social media to ask Netflix to add these shows, and others like it from Black creators. In fact, in response to the announcement, the Netflix UK & Ireland Twitter account replied that the shows were not coming to that region yet, but they had been getting a lot of the same requests.

When these shows debut, everyone should take the time to check them out. Adding variety and different perspectives can be a good way to learn and expand or challenge what you know. Plus these comedies could provide some much needed laughs during a tough time. I’ll certainly jump into Sister Sister to reminisce all the great episodes I enjoyed in my college years. Plus the show features two acting legends in Jackée Harry and Tim Reid.