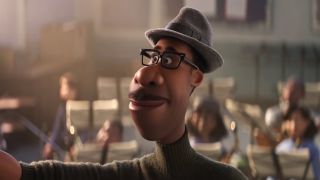 Pixar's Soul — from Pete Docter, the legend behind Inside Out and Up — will make its debut on Dec. 25, 2020, on Disney+, the companies announced today. That makes it yet another major movie to skip theaters and instead premiere on Disney's streaming service instead.

The movie was previously scheduled to hit theaters on Nov. 20.

"We are thrilled to share Pixar’s spectacular and moving Soul with audiences direct to Disney+ in December," Bob Chapek, Chief Executive Officer of The Walt Disney Company, said in a press release."“A new original Pixar film is always a special occasion, and this truly heartwarming and humorous story about human connection and finding one’s place in the world will be a treat for families to enjoy together this holiday season."

Earlier this year, Disney's live-action remake of Mulan also skipped theaters and launched on Disney+ instead. But Mulan was the first (and, to date, only) film to be a part of Disney's "Premier Access" program, which requires an additional fee to watch the movie, on top of the usual monthly subscription to the streaming service. Soul instead will be available for everyone on Disney+.

The film takes a look at what happens when music teacher Joe Gardner meets an untimely death and ends up "the great before, where new souls get their personalities, quirks and interests before they go to Earth."

"The world can be an exhausting and frustrating place — but it’s also full of unexpected joys, even in seemingly mundane things," said Docter, director of Soul and Chief Creative Officer of Pixar Animation Studios. "Soul investigates what’s really important in our lives, a question we’re all asking these days. I hope it will bring some humor and fun to people at a time when everyone can surely use that."

Disney+ runs $6.99 a month, or $69.99 a year and is available on most every major streaming platform. Soul also will be available as part of the Disney+/Hulu/ESPN+ bundle, which gets you all three of those services for just $12.99 a month.