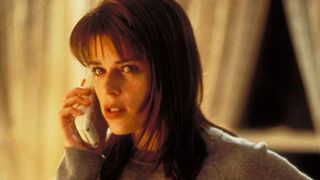 Everyone take a deep breath! After much anticipation, Neve Campbell has finally confirmed her return for Scream 5 in 2022. Bloody Disgusting dropped the news, along with a note from Campbell herself.

“After spending time speaking with Radio Silence, they have shown such love, respect and admiration for Wes Craven and all that he’s created in the Scream franchise. I am beyond excited to step back into the role of Sidney Prescott and return to Woodsboro.”

Radio Silence, the group Campbell mentions in the quote above, is responsible for Ready or Not. The team is made up of Matt Bettinelli-Olpin and Tyler Gillett, and you'd be hard pressed to find two contemporary filmmakers with more reverence for the horror genre. The love shows in their filmmaking, and the vibe they brought with Ready or Not makes them the perfect fit for Scream 5.

The third member of the Radio Silence team, Chad Villella, will be executive producing alongside Scream franchise creator Kevin Williamson and a Project X Entertainment team that will consist of Paul Neinstein, William Sherak and Vanderbilt that will be acting as producers.

There was already a huge amount of excitement surrounding this new entry into the franchise, given the number of familiar faces who have already confirmed their return. This announcement that Sidney Prescott will be headed back to Woodsboro is exactly the kind of hype that will keep fans going until the film's release in January of 2022.