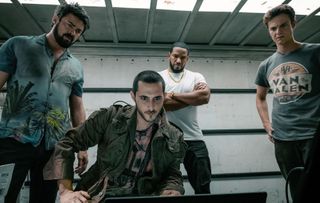 Hey, were you excited about that clip from The Boys that just debuted at Comic Con at Home? Well, good, because Amazon Prime Video has also just announced that the series has also been picked up for a third season. While it's not technically a two-season pick-up order, it's still tossing another one on without seeing how season two performs. That might seem like nothing, but it's always exciting when a studio is excited about or trusting enough in one of their properties.

In a more intense, more desperate Season 2 of The Boys, Butcher, Hughie and the team reel from their losses in Season 1. On the run from the law, they struggle to fight back against the Superheroes. As Vought, the company that manages the heroes, cashes in on the panic over the threat of Supervillains, and a new hero, Stormfront, shakes up the company and challenges an already unstable Homelander.

So, there you have it. Second verse looks to be am immediate continuation of the first, as expected before this season three announcement was made. As you can tell by the tweet above, Amazon Prime Studios isn't quite sure when we'll be getting season three on the account of the world being on fire!

At least you've got season 2 to keep you company for now!