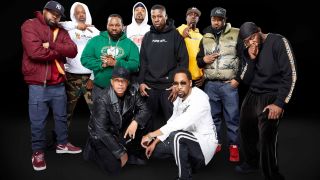 Filmmakers have adapted Wu-Tang Clan’s expansive history into a number of high-profile television and film projects in recent years, including Showtime’s four-part 2019 documentary Of Mics and Men and Hulu’s fictionalized series Wu-Tang: An American Saga. Netflix is set to enter the fray with Once Upon a Time in Shaolin, a film depicting the dramatic true story of how “pharma bro” Martin Shkreli acquired the only copy of the group’s album, its seventh full-length release.

Collider reported Monday that director Paul Downs Colaizzo (Brittany Runs a Marathon) will direct the film for Netflix from a script by Ian Edelman, produced by Wu-Tang impresario RZA (Cut Throat City). Recorded over a span of six years, a single copy of Once Upon a Time in Shaolin was pressed onto CD in 2014 and sold to Shkreli the following year. Shkreli’s conviction for securities fraud in March 2018 threw the album’s fate into limbo after he surrendered it to a federal court, and RZA’s subsequent attempts to buy the album back were thwarted by the terms of the original deal to sell it. Those terms further prohibited the album from being duplicated or sold until 2103, although the owner can release the album for free and play it at listening parties - which Shkreli did before losing ownership.

RZA’s original goal with the release was to return music to the value of fine art. Skreli’s dubious reputation, which the group did not know at the time of the sale, inspired them to donate a significant portion of the profits to charity. Not only does the album feature the entire Wu-Tang Clan but rapper Redman, actress Carice Van Houten (Game of Thrones) and on two tracks, Cher. A rumor surfaced at the time of the original news about the album that Once Upon a Time in Shaolin could be re-acquired via a “one-time heist or caper” to steal it by “active Wu-Tang members… and/or Bill Murray.” Though that information turned out to be false, I imagine fans of Wu-Tang - and good drama - would embrace a legend that cool over the truth.