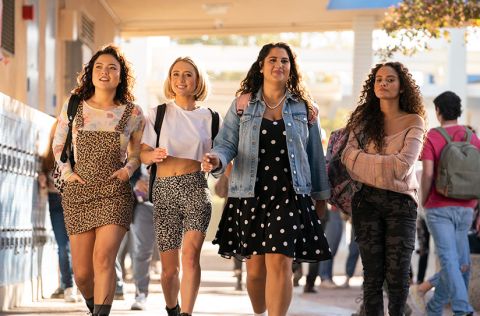 American Pie occupies a unique place in the last two decades of cinema history, a relic of a bygone era that tried to update or reinvent some aspects of the teen sex comedy while doubling down on others. American Pie: Girls’ Rules probably owes a greater debt to recent girl-power comedies like Blockers, How to Be Single and Booksmart than the franchise to which it’s pretty tentatively attached, but that’s a good thing in an era where, one, sex positivity is more important than ever to promote, and after nine installments, allowing women to take the lead in some horndog hijinks feels woefully overdue.

American Pie: Girls' Rules is available on-demand, but it also sneaked onto Netflix at the last minute. That's the good news.

The bad news is that you don't get the same content on Netflix from one country to the next. For that, you're going to need to use a VPN. A Virtual Private Network allows you to route all of your network traffic through a specific set of servers through a specific country.

But you need to be able to trust your VPN, because all of your network traffic is going through it. For that, we recommend ExpressVPN.

And it's a great way to watch American Pie: Girls' Rules — or whatever else you want —  from anywhere in the world.View Deal

Featuring Madison Pettis, Lizze Broadway, Natasha Behnam and Piper Curda as the girls who playfully (and memorably) make the rules, American Pie: Girls’ Rules is not just a successful and decidedly more inclusive update of the series, but probably the best overall installment since the original film back in 1999.

By the time Paul and Chris Weitz directed American Pie 21 years ago, sex comedies had deservedly fallen out of fashion. Notwithstanding films like Sixteen Candles and Revenge of the Nerds that flirted or even openly celebrated rape as a romantic “tactic,” the genre’s heyday was driven almost exclusively by horny young men who primarily viewed their female counterparts as dream-girl conquests when they deigned to learn anything about them that wasn’t purely gynecological. But the parallel thread of ‘80s teen comedies that focused more on romance and relationships converged with its raunchier counterpart in the first American Pie with the story of four young men determined to lose their virginity, but whose “first time” ultimately meant something different to each one of them.

Certainly the film indulged more than a few adolescent fantasies for Jim, Oz, Kevin and Finch, but their female partners were more fully fleshed-out individuals with desires of their own. (Though I’m hardly an expert, I can’t remember many times before American Pie where a female character receives oral sex to completion.) Moreover, sex and its pursuit served primarily as a delivery system for ritual humiliation for the guys, a perhaps overdue rejoinder to decades of rewarding geeks with naked female flesh at no real cost. The original-cast sequels more or less copied the same approach as the first film, as these characters grew up just a little bit, but more often than not found themselves on the receiving end of some sort of very public embarrassment after attempting to gain the upper hand in a sexual tete-a-tete.

To duplicate too many of the core gags in the earlier Pie films would not only be repetitive, but fairly irresponsible with a group of women at the helm. (Though the relationship between Finch and Stifler’s Mom was always consensual, for example, you simply cannot reverse that age and gender dynamic in 2020 without dealing with some pretty heavy power dynamics that, quite frankly, aren’t funny.) And so in Girls’ Rules, the foursome makes a sex-before-prom pact to support Annie, the only virgin, through her first experience while breaking some bad habits for the other three: Stephanie, a chip off of Seann William Scott’s iconic block, wants to find a “nice guy” rather than an empty conquest; Michelle needs to step away from her drawer full of sex toys for some real-world experience; and Kayla has to come to terms with the make-up-to-break-up dynamic she maintains with her longtime boyfriend.

Bridesmaids quite beautifully set female-led comedies on a new path, not just dealing with ideas of identity and self-actualization but embracing the idea that women can be funny in the same way as men. The transparent sexism of years of storytelling feared and refused to let women be silly and sexy at the same time, a problem that’s only begun to be addressed thanks to expanded opportunities for women to tell their own stories. The challenge has become to create female characters and experiences that feel authentic; simply changing the gender of a character - as in, a female character that “acts like a man” isn’t enough. And the idea of offering a variety of female characters who get to have different experiences and different feelings about love and sex and everything else is a good start.

Co-written by Blayne Weaver and David H. Steinberg, Girls’ Rules makes a thoughtful effort to allow these characters to have sexual experiences that they control while also generating some solid comedic scenarios. Annie’s inexperience makes for the majority of the sexy hijinks, starting when she scales her boyfriend’s roof (in heels no less) for a secret romantic interlude; but her “education” — including a “vibrating underwear” scene that audiences previously saw in The Ugly Truth — forms the backbone of a journey that actually feels important, even if it’s buried in a bunch of slapstick. Complications ensue when all four women fall for a new classmate named Grant (Darren Barnet), inadvertently prompting them to learn those life lessons in the race up to prom (or “MORP,” the movie’s “woke” reinvention of homecoming that encourages attendees to wear their pajamas), and pair off with the “right” partner who unsurprisingly was in front of each of them the whole time.

Ultimately, director Mike Elliot (who produced several of the earlier direct-to-DVD installments) doesn’t quite have the focus, specificity, or the worldview to narrow these stories into the more meaningful dimensions that Olivia Wilde did in Booksmart, or Kay Cannon did in Blockers, which spotlighted the growth rather than sexual achievement of their characters. (Also absent from this film are any non-cisgender relationships, which only invite more viewers to watch and identify with these stories, but then again, teenagers discovering “nontraditional” sexual preferences is something extremely hard to treat sensitively and humorously, even with the surest of hands.) But Pettis, Broadway and their co-stars are really charming and likeable in their roles, navigating their way through a world of sexual experience that as teenagers they know a whole lot about in the internet age but are still finding boundaries for that suit them. Further, they make the four very different characters feel like real and believable friends, although I’m not fully convinced that young women greet one another by yelling “what’s up, bitches!” as often as these four seem to do (or maybe should).

A soundtrack full of disco covers, as well as a dream sequence right out of A-Ha’s “Take On Me” music video, hints further than this was meant to evoke those sex comedies of yesteryear. But what the film lacks in novelty it makes up for in innovation and heart, welcome substitutes after decades of films about “doing it” that far too infrequently respect the participants and are more interested in showing the deed than exploring its emotional dimensions. After a whole lot of copycats and milquetoast imitators, including more than a few of the sequels between then and now, American Pie: Girls’ Rules proudly upholds the tradition established by the 1999 original film, and nudges it forward in meaningful, important ways. All of that probably sounds lofty for the ninth chapter in a series centered around teenagers trying to get laid, but if there’s one thing that American Pie has demonstrated over and over again, it’s that sex - for both men and women - is nothing if not surprising.