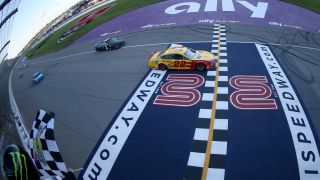 The FireKeepers Casino 4000 will bring NASCAR drivers to Michigan for the first race of a weekend doubleheader on Saturday, August 8. This race will take on extra importance as the sport's playoffs rapidly approach.

The FireKeepers Casino 400 will air on NBCSN, the broadcast network's 24 hour sports channel, on Saturday at 4 p.m. Eastern time from Michigan International Speedway in Brooklyn, Mich. NBCSN can be found on cable and satellite, or on streaming services like Sling TV and Hulu With Live TV , which is available with a free trial.

The ongoing coronavirus pandemic has shaken up major sporting and entertainment events across the country, and the NASCAR calendar is no exception.

The FireKeepers Casino 400 was originally scheduled for June, but was postponed due to the pandemic, The Detroit News reported. After Saturday's 156-lap, 312-mile jaunt, drivers will do it all over again Sunday for the Consumers Energy 400, which you can also watch on NBCSN.

Unlike last week's Foxwoods Resort Casino 301 in New Hampshire, the Michigan races will take place without fans in the stands.

Brad Keselowski came away with his third win of the season last week, solidifying his No. 2 position in the NASCAR Cup Series standings. He trails Kevin Harvick, who finished fifth in New Hampshire, by less than 100 points.

NASCAR's playoffs will commence Sept. 6 at Darlington Raceway. The sport's top 16 drivers will advance to the playoffs, and that number will be whittled down to four before the finale at Phoenix Raceway Nov. 8.

There was little change in the standings after the race in New Hampshire, though Denny Hamlin replaced Ryan Blaney in third place. Here's the top 10 drivers in the NASCAR Cup Series heading into this weekend's races:

NBCSN will carry the FireKeepers Casino 400. You can find that on cable or satellite packages, or via several streaming services that carry it.

A cheap option may be Sling TV, which offers NBCSN in its Sling Blue package at just $30 a month. Just note that Sling Blue doesn't have ESPN. Sports fans can get both Sling Blue and Orange, which carries the worldwide leader, for $45 per month, or just $35 for your first month.

NBCSN can also be found on Hulu With Live TV and AT&T TV Now, which each cost $55 a month. FuboTV carries it at $60 per month, as does YouTube TV at $65 a month.