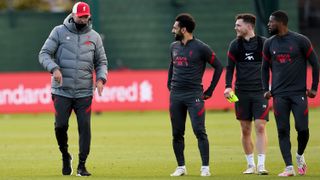 We're a handful of games into the 2020-21 Premier League season, and today two of the Top 4 teams go at it. Liverpool and Arsenal will always be a special event, even more so these days.

So how can you watch Liverpool vs. Arsenal if you're in the United States? It's a little different than usual.

And we've got all the details.

How to watch Liverpool vs. Arsenal anywhere in the world

If you're elsewhere in the world and have found yourself away from home but still want to watch today's Liverpool vs. Arsenal game, a VPN might be the way to go. It allows you to tunnel all of your network traffic through a specific set of servers in a specific location. So you can make it seem as if you're still in the UK if, in fact, you've found yourself in Brussels for the day. (A trip well worth taking, by the way.)

How to watch Liverpool vs. Arsenal in the United States

If you're used to watching Liverpool vs. Arsenal or the Premier League in general on the NBC family of channels in the United States, you'll not be too far from home for today's game. But instead of Liverpool vs. Arsenal being on NBCSN or even NBC proper, you'll have to hop over to NBCUniversal's new streaming service — Peacock — to watch today's game. Kickoff is scheduled for 3 p.m. Eastern time.

Peacock is home to the vast catalog of NBCUniversal content, as well as live sports. It has a couple tiers of service — free, supported by advertising, and a $4.99-a-month Premium tier that includes more shows and new exclusives. The Premium tier also is what you'll need to watch Premier League games live.

There's also one more way to give Peacock money — and additional $5 a month on top of Premium will get rid of most advertising on non-live shows.

How to watch Liverpool vs. Arsenal: Where we're at so far

Both Liverpool and Arsenal are two games into their seasons, with both teams notching two wins thus far for six points each. Arsenal is a point ahead in goal differential, though, having scored five while allowing just one. Liverpool has scored six but given up three goals in its first two games.

Arsenal so far has beaten West Ham 2-1 and Fulham 3-0. Liverpool managed Chelsea 2-0 and eked out a 4-3 over the newly prompted Leeds.