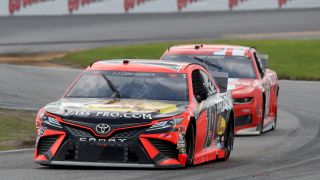 Racer Martin Treux Jr. has a chance to build momentum and rise in the standings at the NASCAR Cup Series Race at Dover. (Image credit: Photo by Chris Graythen/Getty Images)

We've got a pair of NASCAR Cup Series races in Dover this weekend with the Drydene 311. (Or should that be 622?) One track, two races over two days.

There’s not much time left in the truncated 2020 NASCAR Cup Series slate, so the stragglers need to take advantage of their opportunities while there’s still a chance. Coming off of a heated battle during last weekend’s competition at the Daytona Road Course, only three races remain in the regular-season slate.

Two of the last three competition — before the Chase for the Cup kicks into overdrive takes place on Saturday, Aug. 22, and Sunday, Aug. 23, with green flags at 4 p.m. Eastern both days. Both races will be broadcast on NBCSN, which is available through a variety of streaming providers beginning with Hulu with Live TV. There are additional options that may also fit your needs, but first, let’s get to the action.

Hulu with Live TV has the channels you want on the service that more people in the United States use to stream live channels than ever before.View Deal

The previous race at the Daytona Road Course was dominated by 24-year-old Chase Elliott, whose steady progression has him at fourth in total points on the season. Elliott, who represents Hendrick Motorsports, took a resounding victory with 54 points, which is nine more than second-place finisher Denny Hamlin.

Elliott will ride his No. 1 spot in the starting grid to Dover International Speedway in Delaware. During the Cup Series’ last trip to Dover in 2019, No. 7 ranked Martin Treux finished second behind Kyle Larson, whose postseason aspirations in 2020 are a pipedream. The most recent power rankings by NASCAR.com showed growth from both Treux and Elliott at third and fourth respectively. Even though Treux hasn’t had more than one win this year, his consistency as one of the top finishers has been impeccable all season.

No. 1 ranked racer Kevin Harvick had a rare disappointment in the most recent race in Daytona. His 17th finish was uncharacteristic from the racer with a 118-point stranglehold over the top spot in the Cup Series. He’ll be starting at 10th this week, which should give him a decent chance to bounce back from that anomaly of a performance.

The same should apply to Brad Keselowski, whose 803 points make him a candidate to overcome the No. 2 position from Denny Hamlin of Joe Gibbs Racing. He’ll start in the seventh position as the pivotal start to a back-to-back set begins. During this time of the year, no race should be taken lightly. If Keselowski is to regain some traction after slipping two spots in the power rankings, he has to make the most of his opportunities in Deleware.

With competition this tight, it’s not going to be an easy task. However, Keselowski has proven that he’s capable of stepping up under pressure.

How to watch the NASCAR Cup Series Race at Dover:

Last weekend’s race at Daytona was cut and dried as it aired on NBC, but you’ll have to dig a bit deeper to catch the race at Dover. This one will be live on Saturday afternoon on NBCSN, which can be harder to track down for cord-cutters, those with lackluster cable packages or anyone in-between.

Luckily, there are still options available to you. NBCSN is available with a subscription to Hulu with Live TV at $55 per month. It’s also available at $30 per month on Sling TV with the Blue package, which offers a limited pool of programming. To add a more complete television streaming package, the Sling Orange + Blue bundle is probably the way to go.

Other options include Fubo TV and AT&T TV Now, which carry NBCSN as part of their offerings at $55 per month. Their varieties are unique to each other, so you may want to dive deeper to find out which is more appealing to your individual taste. Still, you aren’t going wrong with either of these options.

Last but certainly not least, YouTube TV provides access to NBCSN in addition to a wide world of channels and options at $65 per month. No matter which option you find yourself leaning toward, you’ll be satisfied to know that you can catch this race and more with the Chase for the Cup drawing near!