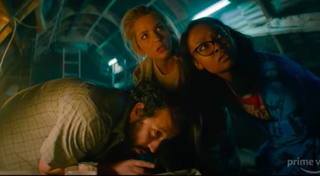 Amazon seems to have picked the perfect time to release the teaser trailer for Utopia, a show that promises to be dripping with conspiracy theories and parallels to our current dark times.

Long in the works, Amazon Studios' adaptation of the British original follows a group of young adults who find a graphic novel that seems to unveil conspiracy theories that are more than just mere theories. This discovery puts them in danger, and they’re chased by what Amazon calls “a shadowy deep state organization.”

The eight-episode series from Gillian Flynn, author and screenwriter of Gone Girl and Sharp Objects, will be released on Amazon Prime Video this fall. It stars Sasha Lane, Rainn Wilson, John Cusack and others.

The first teaser, released Thursday, reveals a backdrop that Utopia viewers should recognize. People in hazmat suits. Wildfires. Melting glaciers. A pandemic. (Are we sure this isn’t a documentary?)

Though we don't get much in the way of an plot summary, the teaser hints at a "rogue scientist who created biological warfare" before cutting to a distressed-looking Wilson, who later dons a hazmat suit and speaks of a "basement scientist" who "inserts himself into a viral pandemic."

"Things are getting dangerous," Lane's character, Jessica Hyde, astutely observes at one point.

Originally slated for HBO, Amazon Studios announced the project in 2018. At the time, it said Utopia would be the first project in an overall deal with Flynn.

If you’re not already familiar, Amazon Prime Video is the streaming service that comes with an Amazon Prime account, which runs $120 a year and includes other membership perks, like faster shipping on many items. The service can be accessed on a wide variety of platforms, including Amazon's own Fire TV Stick, Roku, and Apple TV, as well as gaming platforms and smart TVs.