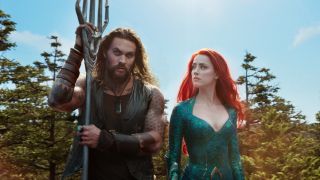 Reminding us all to hydrate, Aquaman’s James Wan and Patrick Wilson stopped by the DC FanDome to chat about filming their Atlantis centered hit and what we can expect for the 2022 sequel.

James Wan (writer/ director) and Patrick Wilson, who plays King Orm, chatted about Wan finding out he’d been selected to write and direct the film. The two were working together on The Conjuring 2 and Wan revealed that he immediately knew Wilson was right for the role as King Orm as soon as he signed on. The two have obvious chemistry, this being the fifth film the pair has collaborated on.

At the time, Jason Momoa had already signed on for the lead and Wan wanted to make sure he had someone who could go up against Momoa, and be the guy to take him on while also being different enough to be his counterpart. Atlantis shaped Orm and Wilson’s take the character was part of the world building. Wan ended up writing Orm just for Wilson.

The living Ken doll and his “creepy puppet” brother discussed getting into the physical elements of the role. On the character, Wilson said, “he is just jacked, I knew that I wanted to push myself.”

The two had the most fun when talking about the infamous harnesses that allowed them to shoot as if they were floating in water. Channeling his inner Maverick, Wilson mentioned being “inverted” and acting through that, and the core strength required for the gig. Talking over behind the scenes footage, the two laughed at acting while floating on a harness and the unique way they lifted Dolph Lundgren (King Nereus) into the air. A teeter totter. To shoot a floating former The Punisher, they put the guy on a seesaw and had two stunt guys stand on either side to make him look like he was floating in space.

Wan and Wilson were committed to world building and enjoyed bringing a character to screen for the first time. They are excited to “continue the journeys of our heroes and antiheroes.”

Not sharing a lot of what’s to come in the sequel, Wan let on that they plan to expand the world, promising to bring in new parts of the ocean and to find something fresh. Wan said to expect something a little more serious and a little more relevant to the world we’re living in today.