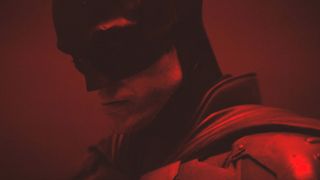 After much anticipation, Matt Reeves' The Batman made its way to DC FanDome. The film closed out the major panels for what's now the first day of the event and featured Reeves and professional fangirl extraordinaire Aisha Taylor chatting about the film. We even got a little tidbit from Robert Pattinson, who seemed just thrilled to be involved.

Reeves and Pattinson both stressed that it's way too early to tell much about the film (COVID shut down the production early on), but tease a fun surprise at the end of the panel.

Before they get to that surprise, Reeves reiterated that we're looking at a very early Batman. Think somewhere around year 2, where Bruce Wayne is still trying to figure out how to be The Batman, and what "good" looks like as a vigilante. Because it's so early, Selina Kyle (Zoe Kravitz) isn't Catwoman yet, and the same can be said with most of the other rogues gallery that we'll be seeing.

Now, about that surprise.

Gotta be honest, y'all. For all that talk of originality, this looks exactly like every other Batman we've ever seen. Now, with that said, we've seen exactly one trailer. And outside of the sameness, it's a perfectly capable one. With how little they were able to shoot so far, it's relatively impressive they were able to build out what they did.