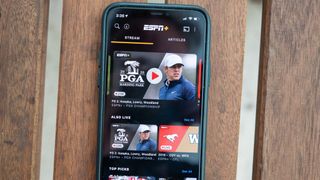 The monthly price for ESPN+ will increase to $5.99 a month for new subscribers starting Aug. 12. (Image credit: WhatToWatch.com)

The monthly price for ESPN+ is going up $1 a month for new subscribers, the streaming service confirmed today. (It'd previously been rumored.) That'll bring the monthly cost to $5.99, beginning Aug. 12. (So you have until then to get in at the lower rate.)

Current subscribers won't face any price increase for at least a year, the company said. Try not to spend that $12 all in one place.

The annual ESPN+ plan stays at $49.99 a year, so you'd actually do well to upgrade to that scheme if you want to save a few bucks. (That also is what Hulu is pushing these days, too.) And the ESPN+/Hulu/Disney+ bundle also stays the same, at $12.99 a month.

And not that anyone ever loves to see a price increase of any kind, but that's still a really inexpensive way to watch all kinds of sports that you can't see anywhere else on TV. So if you'd been hesitating to drop what amounts to a Starbucks trip a month on some live sportsball, now's a good time to get to it before it gets slightly more expensive.

Here's the email that's going out to current subscribers:

We wanted to let you know that as of August 12, 2020, the price of ESPN+ Monthly Plans for new subscribers will be changing from $4.99/month to $5.99/month. Because you are already a part of the ESPN+ family, the price you pay will not be increasing at this time. You will continue to get ESPN+ for $4.99/month until at least 8/12/2021 (subject to change and we will let you know before any changes take effect).

During the coming year, in addition to our ongoing coverage of UFC, MLB, Top Rank Boxing, PGA Tour, and the expected return to action of Serie A, the FA Cup and Copa Del Rey, we’ll be adding even more live sports and ESPN+ Originals. Among the new additions to ESPN+ in the coming months are full coverage of Bundlesliga soccer, the second season of Emmy-nominated Peyton’s Places, new episodes of the acclaimed original series Detail, the new ESPN+ original series America’s Caddie (with ESPN’s Michael Collins), as well as coverage of Big 12 college sports and the addition of American Athletic Conference sports. ESPN+ continues as the exclusive home for the entire 30 For 30 documentary series.

ESPN+ also remains available as part of the Disney Bundle -- offering Disney+, ESPN+ and Hulu (ad-supported) for $12.99/month. Bundle & Save.

Thanks for being a part of the team.