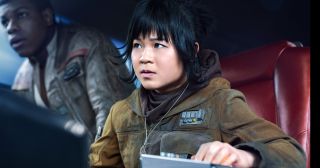 Looks like Star Wars breakout star Kelly Marie Tran will be trading scifi for fantasy! She'll be joining the cast of Hulu's Monsterland, a series based on a collection of stories by Nathan Ballingrud and produced by Annapurna Television.

Ballingrud's stories feature a whole host of mythical creatures that are used in a way to help the given story's protagonist repair something broken in their lives. Monsterland will be a close adaptation of that premise, and created, and written by series showrunner Mary Laws. Executive producers will include Lucan Toh, Megan Ellison, Sue Naegle, and co-ep Ali Krug.

Tran will be joining other stars already announced for the project in an already stacked cast. Katherine Dever, Tyler Schilling and Mike Colter's involvement were announced last November.

Fans have already been wowed by Kelly Marie Tran in the Star Wars universe, so there's no doubt that the actress will crush it in this new role. Her episode will be "Iron River, MI", in which her character Lauren will return to her small hometown to be married. Despite her current bliss, it appears that Lauren has a secret. She had to rebuild her life after she and her best friend inexplicably disappeared when they were sixteen. It appears that the ultimate question will be whether or not she moved on or simply ran away from the problem.