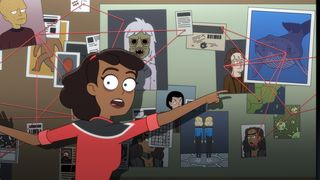 Two weeks out from the premiere of Star Trek: Lower Decks on CBS All Access and we're getting a new look at the animated series.

The new clip features Ensign Brad Boimler (voiced by Jack Quaid) and Ensign Beckett Mariner (voiced by Tawny Newsome) and what we can assume was a healthy fistful of amphetamines.

The gist of lower decks is that while Trek has always had the hotshots who ran things and got all the screen time, there was essentially a lower caste that did a bunch of the ... other stuff. Maybe not quite like how in HBO's Avenue 5 there's a crew full of actors and then a handful of actual engineers doing engineer things, and definitely not a Galaxy Quest situation. It's more of there just being folks who don't always get to go on the cool away missions and first contacts and all.

CBS All Access is the streaming service from. ViacomCBS that includes a good bit of the CBS catalog, as well as new original series like Star Trek: Picard, Jordan Poole's reboot of The Twilight Zone, and the upcoming Star Trek: Strange New Worlds.

It's available on just about every streaming platform (including Roku and Amazon, so you don't have to worry about that) and is available with and without ads.