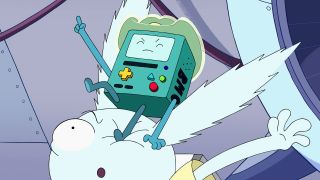 The critically acclaimed and Emmy award-winning Adventure Time concluded in 2018 after 10 seasons, countless comics, several video games, and even a card game. But we haven't seen the last of Finn and Jake!

Coming exclusively to HBO Max, Adventure Time: Distant Lands will feature four hour-long specials diving back into the lives of Finn, Jake, and their family and friends.

HBO's new streaming service, HBO Max gives you access to all of HBO's content and so much more! With select content from TNT, TBS, Cartoon Network, and more, as well as original content, HBO Max is the only place to watch Adventure Time: Distant Lands.

Get an HBO Max Subscription

As Adventure Time neared its end, the team moved away from largely unconnected episodes to miniseries, each made up of eight episodes to tell a single story. Adventure Time: Distant Lands is taking that concept one step further with a series of four hour-long specials. Each of these four specials will be focused on one or two characters from Adventure Time, telling stories of their lives since our heroes saved the Land of Ooo. These four specials will begin in 2020, with the first — BMO — premiering on June 25. (Read our full review of that one.)

The second special — Obsidian — is coming this fall.

You can watch the trailer for the first special, BMO here:

How do you watch Adventure Time: Distant Lands?

Unlike the rest of Adventure Time which aired on Cartoon Network and a number of streaming services, Adventure Time: Distant Lands is exclusively available on HBO Max.

It may eventually make its way to other services for purchase, but for the time being, the only place you can watch is HBO Max. As a plus, all of Adventure Time is currently available on HBO Max as well, so for a low monthly fee, you can watch it all and see the new specials.