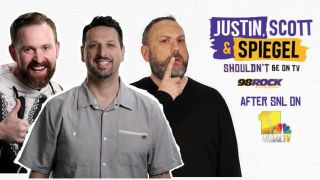 Video sure as hell didn't kill these radio stars! Justin, Scott, and Spiegel dominate Maryland airwaves every weekday morning from 6-10am, and their highlight show is coming back to the airwaves again Late Night this Saturday, July 25, at 1am. That's right after Saturday Night Live on WBAL11 NBC in Maryland, for those regularly watching at that hour.

But if you don't have a cable subscription and you're not fond of those HD antennae strapped to the side of your house, there are still a couple of ways to watch this new show live.

What is this show?

Like the Saturday Morning podcast, JSS Behind the Curtain, the "Justin, Scott & Spiegel Shouldn't Be on TV" show is a collection of the best moments from the weekly morning show with a little extra magic sprinkled in. And, of course, they add video to help radio fans who lack imagination.

While the radio show is itself streamed live every day on the 98Rock website, this limited run TV series takes that video and ramps up the quality with extra features. Expect more video from the guys as they break down everything you've seen and heard, as well as some commentary from the listeners from texts, tweets, and Facebook comments.

What is a Limited Run TV Series? It's a nice way of saying you get a couple of episodes at a time instead of a traditional weekly release season. This show has already had two short seasons, so more may be coming after this first new episode.

How do I watch without cable or local broadcast?

Not every market is popular enough for its local broadcast stations to be picked up by live TV streaming services. Fortunately for you Maryland folk, Baltimore more than makes the cut. As a result, there's no shortage of live TV streaming apps with WBAL TV11 included in its packages.

Here are your options:

The cost: $55 a month after a one week free trial

The cost: $55 a month after a one week trial

The cost: $65 a month after a free trial

The cost: $55 a month after a free trial